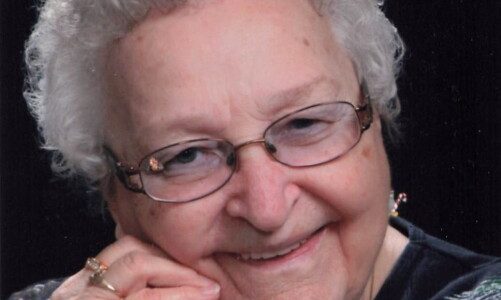 Funeral services will be held on Friday, January 21, 2022, at 10:00 a.m. at Emanuel Lutheran Church in Milbank. Visitation will be held on Thursday, January 20, from 5:00 p.m. until 7:00 p.m. at Mundwiler Funeral Home and continue at the church on Friday, one hour prior to the service. Burial will be in the Milbank City Cemetery.

Phyllis Ann (Wibbens) Hanner was born on May 12, 1934, in Milbank, SD. She was the daughter of Ernest J. Wibbens, Sr. and Lena (Lemke) Wibbens. She attended school in Milbank and graduated from Milbank High School with the Class of 1952. She was employed at Milbank Mutual Insurance Company until her marriage to Ray A. Hanner, Jr. on September 3, 1953, in Milbank. They were blessed with two daughters.

During Ray’s Air Force career, they lived at Ellsworth AFB in South Dakota, Vandenberg AFB in California, Wright-Patterson AFB in Ohio, and Wheeler AFB in Hawaii. During their Air Force time, Phyllis was the secretary of an NCO Wives Club at Ellsworth. Ray and Phyllis coached a softball team at Wheeler AFB while in Hawaii. Phyllis was also an active Girl Scout leader and Sunday School teacher while in Ohio. When Ray retired, they returned to Milbank and started the first Junior Bowling League at Top Hat Lanes. After Ray’s death in 1977, Phyllis took a job with Job Services of South Dakota and worked there for 25 years. She was also the President of T.O.P.S. in Milbank for six years.