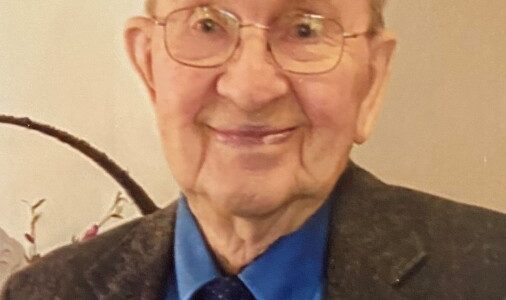 Mass of Christian Burial will be held on Saturday, January 29, 2022, at 11:00 a.m. at St. Lawrence Catholic Church in Milbank. Visitation will be one hour prior to the Mass. Joe’s family would appreciate the wearing of masks.

Joe was born to Alphonse and Mary (St. Pierre) Holtzmann on July 28, 1920, the fourth of seven children. The family lived in Highmore, SD at that time.  He served as a radioman in the U.S. Coast Guard from 1942 to 1946.  He met his future wife, Alice, in 1946 while they were both working at St. Paul’s Indian Mission in Marty, SD.  In 1955, Joe, Alice and their family moved to St. Michael’s Indian Mission in North Dakota where Joe managed the business affairs for the Mission, ran the printing shop, and worked as the Mission’s photographer. He ended his career at Blue Cloud Abbey, Marvin, SD where he also ran the printing shop.

His devotion to his Catholic faith inspired him to serve the church in many ways; the Knights of Columbus, parish council duties, and choir member to name but a few.  He was also very active in numerous civic groups.  Serving on the school board, a long-time member of the American Legion, the Grant County Historical Society, and Garden Club were just some of ways in which he gave back to the community.

In lieu of flowers, the family asks that donations be made to the Grant County Food Pantry.