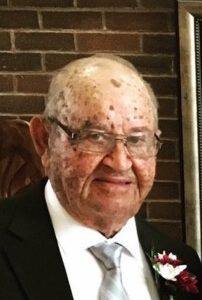 The service will be livestreamed and viewable on the church’s Facebook page, Calvary Church (Assembly of God) Milbank.

Duane Ralph Liebe was born on September 11, 1939 in Milbank, SD. He was the son of Ralph and Bethel (Bohn) Liebe. Duane attended school in Milbank and graduated from Milbank High School. On August 21, 1965, Duane married Marge Lunderville in Milbank. They were married 56 years and blessed with two sons: Daryl and Daniel, and a daughter, Dawn.

Duane was a dairy and grain farmer his entire life and wouldn’t have had it any other way. He loved cattle and the work that came along with them. He had his favorite prized cow, Gypsy Regal Aggie Bessie. He took his grade unregistered herd to a grade A registered herd. Duane loved woodworking, reading and word searches but his favorite hobby was napping. He never met a stranger and could talk an arm off a wooden monkey if you let him. Above all, Duane loved Jesus and his desire was for his family to love and serve Christ.

Duane survived two kidney transplants and was a 54-year survivor.

Duane went to be with this Lord and Savior on Sunday January 30, 2022. He was home with this family, with one hand holding the hand of his love, Marge, and the other grasped the hand of Jesus.