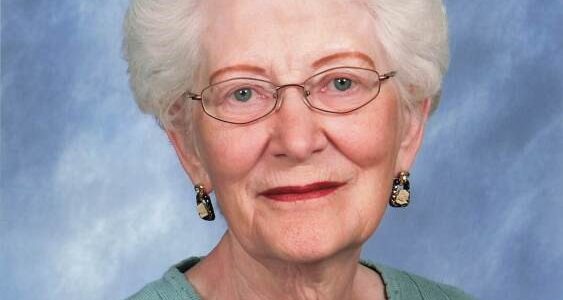 Memorial services for Lorraine are will be in the spring.

Lorraine Mae Bagaus was born on April 20, 1931, in Waubay, SD, to Alvin and Edna (Resbak) Anderson. She attended country school and graduated from Summit High School in 1949. Lorraine married Lloyd Bagaus, also of Summit, in September of that year. They had four children: Neil, Terry, Marcie and Gene.

In 1949 she received her teacher’s certificate from Northern State Teachers College in Aberdeen, SD, and taught in a rural county school. She was a typesetter at the Milbank Herald Advance, lunchroom supervisor in Bath, SD, public schools, and owner/operator with her daughter of Lil Darlings Children’s Clothing in Aberdeen, SD.

In addition to raising four children, Lorraine was very active in church activities, a member of the Milwaukee Road Women’s Club, PTA, a Cub Scout den mother, and a volunteer for numerous charities. She was a member of Parkview United Methodist Church.

Lorraine lived in many towns and cities while following Lloyd’s railroad career. They lived in Marvin, Milbank, Lakeville, Chicago, and Aberdeen, making a home for her family in each location. She returned to Milbank upon her retirement. After retirement, Lorraine and Lloyd traveled to McAllen, TX, each winter. Lloyd passed away in September of 2007.

Lorraine always had a love for music. She sang at many local community clubs and venues in Watertown, Peever, South Shore, and Revillo. She also sang and played with the Milbank Melody Kings. In addition, Lorraine sang at retirement villages in Texas and Florida. Lorraine loved taking her grandchildren to sing at area nursing homes.

Lorraine was preceded by her parents, husband, Lloyd; and brothers: Eugene and James Anderson.