Helen Carlson, age 97, of Milbank, passed away on February 17, 2022, at Ortonville Area Hospital, in Ortonville, MN. Funeral services were held on... 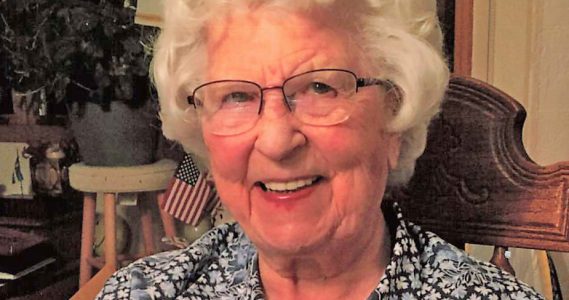 Helen Carlson, age 97, of Milbank, passed away on February 17, 2022, at Ortonville Area Hospital, in Ortonville, MN.

Helen Leona (Johnson) Carlson was born on December 29, 1924, in Madison Township, Grant County, SD. She was the daughter of Ernest and Hannah (Peterson) Johnson. Helen attended country school through the eighth grade at Madison #5.

Helen was united in marriage with Roy F. Carlson on April 12, 1944, at LaBolt Covenant Church in LaBolt. During Roy’s military duty, they lived in Lawton, OK. Following his discharge, they returned to South Dakota and farmed in Madison Township. They were blessed with three children: Myron, Gary, and Julie.  Roy passed away on June 16, 1990. Helen lived on the family farm until moving into Milbank in 1991.

Helen was a faithful member of the Evangelical Covenant Church in LaBolt. She taught Sunday School and was active in the Ladies Aid. With her musical talents, Helen played organ and piano. She was a member of the WCTU (Women’s Christian Temperance Union) where she served as an officer on both the local and state levels. She was a charter member of Strandburg Legion Auxiliary #171.

Helen enjoyed music, bowling, and golfing. She loved to share a cup of coffee with friends. She volunteered for Meals on Wheels and at the Community Thrift Store. She played piano at the local nursing homes. She enjoyed and loved her family, especially when everyone was together. She was known as “Grammy” and her grandchildren and great-grandchildren adored her! Helen had a prayer wall and prayed for her grandchildren and family daily.

Left to cherish her memory are her children: Myron (Carolie) Carlson of Willmar, MN; Gary (Joyce) Carlson of Brookings, SD; and Julie (Ludwig) Hohm of Yale, SD; 8 grandchildren; 23 great-grandchildren. She was preceded in death by her parents: Ernest and Hannah; her husband, Roy; two sisters; and three brothers.