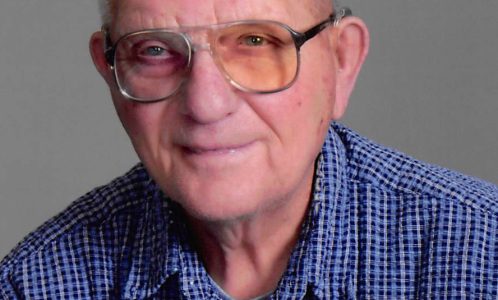 Donald Lorenz Tiegs was born on September 16, 1930, the eldest child of Lorenz and Martha (Woestehoff) Tiegs at their family farm in Tyrone Township of Le Sueur County, MN. He was baptized and confirmed, in German, at Redeemer Lutheran Church of rural Henderson, MN. Don attended country school at District 66 and attended high school in Le Sueur where he graduated with the Class of 1949.

On September 28, 1951, Don was united in marriage with Corinne Loretta Rethwill, a high school classmate, at the Methodist Church in Le Sueur. They were blessed with four children: Mary Martha, Richard Paul, Elizabeth Kay, and Ross Donald.

In October of 1952, Don was drafted into the United States Army and served in Japan and Korea. Following his discharge in 1954, he took advantage of the GI Bill to attended Gustavus Adolphus College where he studied business administration and graduated with his bachelor’s degree in 1959.

After graduation, Don went to work for Firestone Tire and Rubber Company where he worked in the retreading department as shop management. He worked at Firestone in Rochester, MN, for a year then worked in Worthington, MN for six and a half years. Don left Firestone and purchased Cashtown Texaco Station in Ortonville from Rueben Mueller in 1966. The name was changed to Cashtown Service in 1967 and was owned by Don and Corinne until 2002. They also owned and operated Tiegs Self Service for a number of years beginning in 1975. It was located where Artie’s Bait and Tackle is currently located.

Donald was a member of First English Lutheran Church where he served a term on the Board of Education and was a long-time usher. He was also a lifetime member of the Ortonville VFW. Don worked for the City of Ortonville at the golf course for a number of years where he was a groundskeeper and avid recycler, having recycled over 160,000 cans.

Donald enjoyed polka music, dancing, gardening, ice fishing, golfing, and bowling. He was an avid horseshoe player having participated in 11 World Horseshoe Tournaments as well as many other tournaments.

In lieu of flowers, please donate to your favorite charity in Don’s Memory.