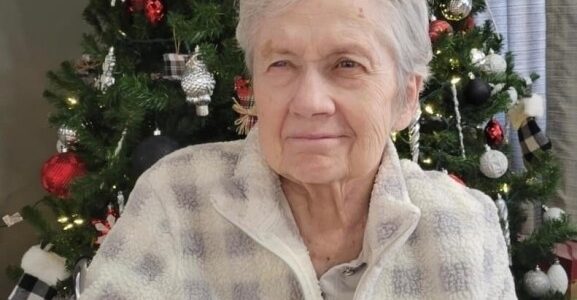 Funeral services will be held on Monday, April 4, 2022, at 11:00 a.m. at Holy Rosary Catholic Church in Graceville, MN. Father Brian Oestreich will officiate, and burial will be in the Graceville Consolidated Cemetery. Visitation will be held at Mundwiler and Larson Funeral Home in Graceville on Sunday, April 3, from 2:00 p.m. until 5:00 p.m. Visitation will continue on Monday, one hour prior to the service.

Darlene Mary (Curran) Carpentier was born on June 11, 1934, in West Bend, WI. She was the daughter of Dan and Leona (Buller) Curran. She moved with her family to Barry, MN, shortly after her birth.

Darlene graduated from St. Mary’s Academy in 1952. She attended a Business Machine course in Minneapolis and lived with a family while she attended the course. The family was quite demanding of her. Upon graduating from the course, she rented a room from a family who were very good to her. Darlene worked for a short time for Northwestern Bell Telephone Company before taking a job at Honeywell. She worked for about a year in the office and then started working in their Lab.

Darlene was united in marriage in 1955. They were blessed with two children: Dale and Rita.

They lived in Burnsville and later in Minneapolis. Darlene returned to Honeywell in 1971 and worked in the Lab. She worked for Honeywell until her retirement. Later, in 1997, she moved to Chokio, MN. In April of 2015, she moved to Grace Village in Graceville. Sadly, she didn’t live there for long as she had a stroke and moved to Grace Home in November of 2015.

Darlene had a challenging but good life. She endured many obstacles in which she met head on. She was a great cook and an avid gardener. In fact, many say she should have obtained a Master Gardener degree. She traveled many times to Europe and visited Spain, Ireland, England, and France, just to name a few countries. She enjoyed the challenge of trying new things including traveling, attending additional schooling, and meeting new people.

Darlene was a faithful member of the Catholic faith. She served as a lector. Her God and her faith were very important to her. Darlene loved her family and was extremely proud of them and their accomplishments.

Darlene was preceded in death by her parents: Dan and Leona Curran; her sister, Elaine (aka Fritz) in 2015, and brother-in-law, Mike Connelly in 2019.