Sirens to be Tested on Wednesday, April 27 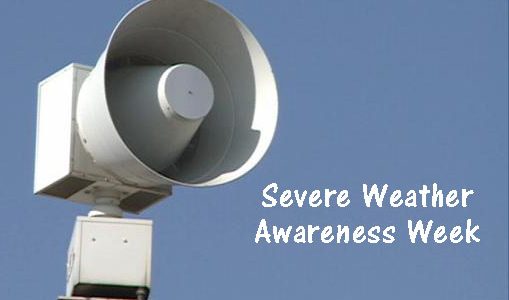 South Dakota observes Severe Weather Preparedness Week in 2022 from April 25 to April 29.  Kevin Schuelke, director of Grant County Emergency Management, says, “Sirens will be tested on Wednesday, April 27. The fire siren will be sounded at 10 a.m. At 10:15 a.m., the tornado siren will go off.”

Schuelke says, “It’s important to recognize the difference between the two sirens. The fire siren is a wavering tone that lasts about 15 seconds or less. The tornado siren is a steady blast for an extended period.”

Thunderstorms, however, are the most prevalent summer storms in our area. A thunderstorm is defined by the National Severe Storms Laboratory (NSSL) as a rain shower during which thunder is heard.” They explain, “The sound comes from the lightning. Therefore, all thunderstorms have lightning. It’s possible to hear thunder from as far as 10 miles away from the lightning that caused it, but just because you don’t see the lightning doesn’t mean it’s not there.”

And although lightning is fascinating to watch, it is extremely dangerous. Lightning is responsible for 24,000 deaths in the world each year and is one of the top three causes of weather-related deaths in the US. If you live in South Dakota, your chance of dying from a lightning strike goes up. According to data from the National Lightning Safety Council (NLSC), “The Mount Rushmore State trails only one state when it comes to lightning-related fatalities.”

If you are a man, the news gets worse. In the US, men are more likely to be killed by lightning than women. According to the NWS, a shocking 81 percent of  lightning-related fatalities are men. But, there’s good news, too.  If you live in the US, you have a 90 percent chance of surviving a lightning strike.

Which is pretty crazy when you consider that a lightning bolt can have up to a billion volts of electricity. That’s a billion with a “B” and about the same amount of power as if you lined up 79.4 million car batteries.

Roy Sullivan, a park ranger, survived not just one lightning strike, he was struck seven times. He holds the record according to the Guinness Book of World Records. In Zimbabwe in 1975,  21 people established another horrifying world record, when they were all struck and killed by one bolt of lightning as they huddled for safety in a hut.

But again, there is good news. Edwin Robinson of Massachusetts was unfortunately blinded as the result of a car accident he was in in 1971. It seemed as though luck had totally abandoned Robinson when he was struck by lightning in June 1980. But after remaining unconscious for 20 minutes, he awoke to discover he had regained his sight.

Being prepared can relieve some of those worries. Remember, it’s possible for a current from a lightning flash to travel long distances, Don’t wait until lightning gets close to move to safety!

If you are outdoors:

If you are Indoors, the electrical wiring and appliances in your house or business can be dangerous during a thunderstorm.

The NWS encourages you to think about personal safety plans and to “Know Before You Go.” Wherever you are –at home, school, work, or traveling, review the weather forecast and think about severe weather safety in every situation.