Father Dana Christensen passed away on May 15, 2022, at his home in Milbank surrounded by family after a courageous battle with ALS.  A... 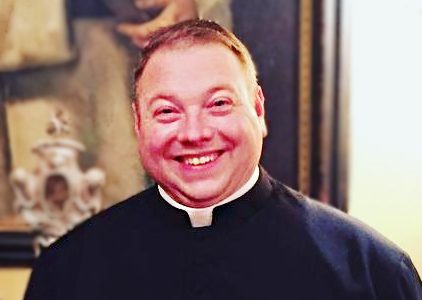 Father Dana Christensen passed away on May 15, 2022, at his home in Milbank surrounded by family after a courageous battle with ALS.

A Solemn High Requiem Mass of Christian Burial will be offered for Father Christensen on Thursday, May 19 beginning at 3:00 p.m.  The Mass will be prayed at the Cathedral of St. Joseph in Sioux Falls with Father Prior Benedict, OSB, a friend of Father Christensen’s, presiding.  The Most Reverend Donald E. DeGrood will attend and pray in choir. The Mass will be livestreamed and recorded and viewable below this obituary. Visitation will be held on Wednesday, May 18, 2022, from 5:00 p.m. until 7:00 p.m. at St. Lawrence Catholic Church in Milbank A liturgical wake service will be prayed at St. Lawrence Church beginning at 7:00 p.m.  Reverend Thomas Hartman will preside. Interment will be held on Friday, May 20, 2022, at 11:00 a.m. at St. Lawrence Cemetery in Milbank. Reverend Gary DeRouchey will preside at the burial. Friends and family are invited to gather in the parking lot at St. Lawrence Church by 10:50 a.m. to drive together in procession to the cemetery. A luncheon will follow at St. Lawrence Church.

Dana Robert Christensen was born on June 12, 1977, the Feast of Corpus Christi, in Milbank, SD.  He was the eldest of four children born to Lowell and Cindy (Kelly) Christensen.  Dana received the sacraments of baptism on June 27, 1977, and confirmation on May 1, 1994, at Saint Lawrence Church in Milbank.

After graduating high school in 1997, Dana enrolled in the Immaculate Heart of Mary Minor Seminary in Winona, MN.  In 2001 he continued his priestly formation by enrolling at Kenrick-Glennon Seminary in St. Louis, MO.  On June 3, 2005, he was ordained to the priesthood at the Cathedral of St. Joseph by the Most Reverend Robert J. Carlson, in his capacity as Bishop emeritus of the Diocese.

Upon his ordination to the priesthood, Father Christensen served as an associate pastor at Holy Spirit Parish in Sioux Falls. In 2007, at the appointment of the Most Reverend Paul J. Swain, Father Christensen began his pastoral ministry as pastor to St. Rose of Lima and St. Joseph the Workman parishes in Garretson and Huntimer.  He would go on to serve in pastoral ministry at the parishes in Ethan, Dimock, Alexandria, Emery, and Bridgewater before retiring from his role as pastor due to medical reasons. During his time at Alexandria, Father Christensen served as the chaplain for the volunteer fire department and EMS.

In 2009, Father Christensen was assigned to graduate studies at St. Mary of the Lake University in Mundelein, IL whereat he studied sacred liturgy.  In addition, Father Christensen served as associate vocations director as well as a dean and member of the presbyteral council of the Diocese.

Father Christensen served as a chaplain to the Northern Lieutenancy of the Equestrian Order of the Holy Sepulcher.  He also utilized social media and personal blogs as a tool for the evangelization he attempted to provide as a function of the holy priesthood to which he was ordained.

Grateful for his witness and 17 years of priestly ministry, please remember Father Christensen in the customary offering of three Masses.