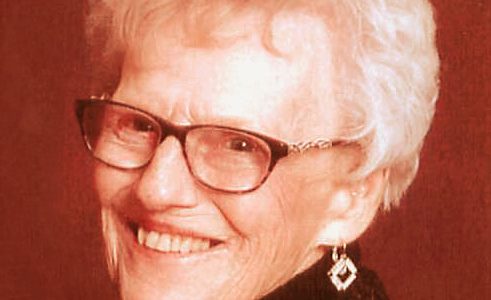 Helen Marie Cram was born on November 1, 1937, at the family farm in Deuel County, SD, near Revillo, to Ithiel and Ivy (Storm) Cram. She grew up on the family farm, and attended country school District #59, until eighth grade. Helen graduated from Revillo High School with the Class of 1956. She was united in marriage with her high school sweetheart, Donald Heller, on December 19, 1956, at Annunciation Catholic Church in Revillo. To this union, daughter, Deb, and son, Lonny, were born. After their marriage, they resided in Albee, SD, and Donald farmed with his dad for about four years. They lived and farmed together on the Heller family farm and celebrated 65 years of marriage. Helen was a dedicated farm wife; she would work right alongside Donald, and she managed to keep the household running. She loved raising her kids and she was an excellent cook. Helen did some cooking and canning. She was able to work with Donald until Parkinson’s Disease slowed her down.

Helen was a member of the Half-Century Extension Club in Revillo for many years and really enjoyed being part of the Birthday Club with her special friends. She enjoyed spending time with her grandkids and keeping up with all their activities. She liked to look nice and enjoyed nice things. Helen and Donald enjoyed old time dancing and playing cards with the neighbors. They traveled around the United States, but Helen always appreciated returning home to Revillo.

She was preceded in death by her parents; brothers: Harold, Kenneth, Wayne, Francis, Harvey, and Quentin.