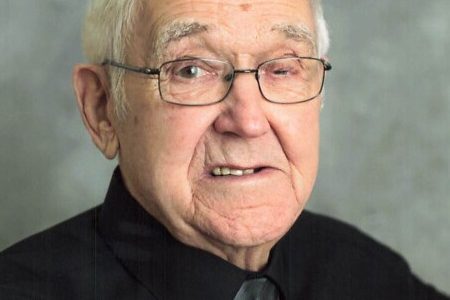 Lowell Donald Dockter was born on December 26, 1925, northwest of Twin Brooks, SD. He was the son of Otto and Linda (Karges) Dockter. Lowell was baptized at home on March 22, 1926, and confirmed in the Lutheran faith at Emanuel Lutheran Church in Milbank, SD, on April 2, 1944. Lowell has been a life-long member of Emanuel Lutheran Church.

Lowell attended country school at Kilborn #2 in Grant County through the eighth grade. On March 16, 1945, at the age of 19, Lowell enlisted in the United States Army. He served during WWII and served 12 months in Korea as a baker in the 71st Station Hospital. He was awarded the Asiatic Pacific Service Medal, Victory Medal, and the Army of Occupation Medal (Japan). Lowell was honorably discharged on December 16, 1946. Lowell returned to South Dakota and farmed with his father.

Lowell was united in marriage with Ruth Hilke Aden on September 25, 1949, at Salem Lutheran Church in Milbank. Together they farmed northwest of South Shore, SD. In 1964 they purchased the farm from the Gooch family. Lowell served as a township supervisor and on the school board in Mazeppa Township. They retired from farming in 1990 and continued to reside on the farm. Ruth passed away on November 16, 2016. Lowell considered himself as Dwight’s “hired hand” and helped with field tillage work until the age of 95 years.