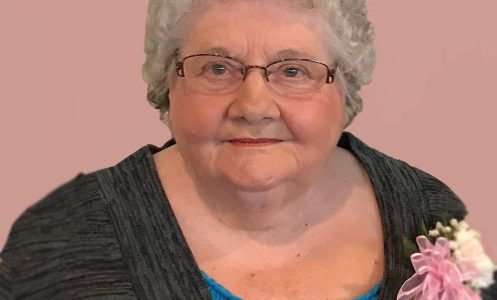 Elvina Louise (Folk) Boerger was born on September 20, 1940. She was the 13th of 18 children born to Steve and Barbara (Giessinger) Folk, in Milbank, SD. Elvina attended rural school through the eighth grade at Geneseo #4 in Roberts County, SD. Elvina was united in marriage with Arvid B. Boerger on February 21, 1959, in Milbank. They settled on the Boerger family homestead. Together they farmed, milked cows, raised calves, chickens, and pigs.  They were blessed with four daughters: Gail, Susan, Rita, and Sharon. They retired from milking and sold the cows in 1997 but continued to farm.

Elvina was a fabulous cook and baker. She will be remembered by her dill pickles, deviled eggs, and rhubarb coffee cake.  She enjoyed looking through cook books and trying new and fancy recipes. She loved to garden and always shared and preserved her harvest.  She enjoyed collecting dolls, beanie babies, and denim day figurines. She absolutely loved Elvis! She loved his music and collected many of his memorabilia.

She and Arvid loved to visit and enjoyed sharing a cup of coffee or happy hour with friends and neighbors. They rarely missed the weekly card drawings and shaking dice with friends. Elvina like to play Bingo and cards. Most importantly, Elvina loved her family. She loved spending time with her grandchildren and great-grandchildren and always enjoyed giving them gifts. Elvina was a member of Central United Methodist Church.