Mary Fredrick, age 90, of Ortonville, MN, passed away on Wednesday, June 29, 2022, at Fairway View Neighborhoods in Ortonville. A Memorial Mass will... 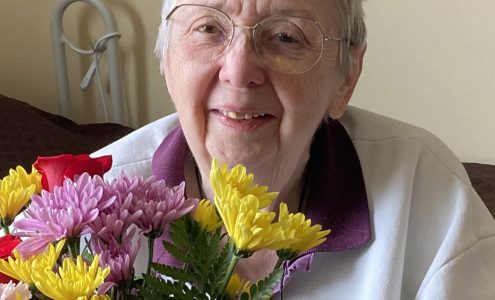 A Memorial Mass will be held on Wednesday, July 6, 2022, at 11:00 a.m. at St. John’s Catholic Church in Ortonville, MN. Visitation will be held from 9:00 a.m. to 11:00 a.m. at the church on Wednesday. Fr. Brian Oestreich will celebrate the Mass. Inurnment will be held at a later date at Saint Francis of Assisi Columbarium on Fairfield Glade in Cumberland County, TN.

Mary Veronica (Kvidera) Fredrick was born on October 25, 1931, at home on the family farm near Ortonville, MN. She was the daughter of Ludvik Raymond and Teresa Marie (Coyne) Kvidera. A year after Mary’s birth, her parents had to sell the farm due to the depression, and they moved into town.

After graduating from Ortonville High School in 1949, Mary moved to Minneapolis, MN, and worked at a dime store and at Sears on the sales floor. She later moved to Los Angeles, CA, in hopes of being a model and went to work for Bank of America. She left California for Erie, PA, and worked for Bank of Erie as a teller and opening new accounts. She eventually moved back to Minneapolis and took a job at Sears, working in the credit department until she retired.

Mary met Mark Fredrick through her church. They attended Cristio, a church group, together. They were united in the Sacrament of Holy Matrimony on December 30, 1976. They enjoyed traveling in a 5th wheel trailer for three years before moving to Fairfield Glade, TN; Mark had grown tired of Minnesota winters. Mark served as a Deacon at St. Francis of Assisi Catholic Church. They were blessed with 38 years of marriage.