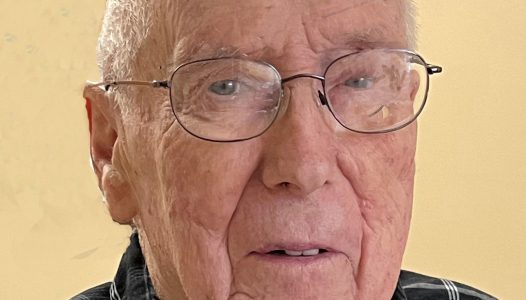 A funeral service will be held at 12:00 noon on Tuesday, July 12, at St. Andrew’s Lutheran Church in Mahtomedi, MN. Visitation will be one hour prior to the funeral at the church in Mahtomedi. Burial will be at 12:30 p.m. on Wednesday, July 13, at Ft. Snelling National Cemetery in Minneapolis, MN.

Kermit Wells Johnson was born on October 18, 1929, in rural Cottonwood County, near Windom, MN, to Harold C. and Henrietta (Dikkers) Johnson. Kermit grew up in Windom and graduated from Windom High School in 1947. He was a good athlete, playing football and basketball. Kerm served in the US Army for three years during the Korean conflict.

Kermit married his high school sweetheart, JoAnn (Nelson), on Sept. 9, 1951. He attended the University of Minnesota and graduated as a Doctor of Veterinary Medicine. They moved to Milbank, SD, in 1956 where Kerm joined the Milbank Veterinary Clinic. In 1981 Kerm and JoAnn moved to Rapid City, SD, where he was employed by the SD Livestock Sanitary Board. They moved to St. Andrew’s Village in Mahtomedi, MN, in 2014 to be closer to their children.

Kermit was active at American Lutheran Church in Milbank, serving on several councils and boards. He was honored to serve on the National Council of the ELCA in the mid 70’s. He enjoyed bird hunting when he was younger, fishing, and golfing in Milbank and Blackduck, MN. He had a deep respect for Native American culture, honoring his children’s heritage. Kermit was a hardworking large animal veterinarian, and he looked forward to spending time every summer at the family cabin on Island Lake near Northome, MN.

After his retirement, Kermit enjoyed being a volunteer at The Journey Museum in Rapid City. He showed his family what it is to live a good life by example. Kermit’s legacy is the family cabin near Northome, where his grandchildren and great-grandchildren are still making memories and learning how to fish.

He was preceded in death by his parents; his wife, JoAnn; brothers, Tom Johnson, and Bruce Johnson.