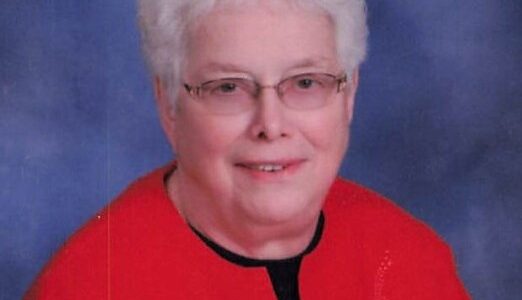 Rose Ann Wollschlager, age 86, of Milbank, formerly of Revillo, passed away on July 15, 2022, at St. William’s Care Center in Milbank.

Mass of Christian Burial will be held on Wednesday, July 20, 2022, at 11:00 a.m. at St. Lawrence Catholic Church in Milbank. Father Gary DeRouchey will celebrate the Mass.

Burial will be at St. Mary’s Catholic Cemetery, Revillo.

Rose Ann (Adelman) Wollschlager was born on January 28, 1936, in Ortonville, MN. She was the daughter of Andrew and Susan (Vonderharr) Adelman. Rose Ann attended parochial school in Rosen, MN, through the eighth grade. She continued her high school education in Bellingham, MN, graduating with the Class of 1954.

Rose Ann worked as a nanny for area families, played organ for St. Joseph’s Men’s Choir in Rosen, MN, and Serenity Choir. She was united in marriage with James A. Wollschlager on April 16, 1955, at St. Joseph’s Catholic Church. They were blessed with ten children. They resided north of Revillo where they farmed. They purchased the home place in 1960.

Rose Ann was a dedicated farm wife and mother, showing her love in her Saturday baking and daily hearty meals. She tended a large garden and canned or froze her harvest, creating traditions and memories of the sweet corn process for grandchildren and great-grandchildren alike. She kept her children going “in the right direction.” As the children became more independent, Rose Ann worked off the farm at the canning factory, Stearn’s, and at Big Stone Cheese Factory for 21 years. She was a faithful member of Annunciation Catholic Church in Revillo where she played organ for 53 years and was a member of the Altar Society.

Rose Ann’s husband, Jim, passed away in 2001. Rose Ann remained on the farm for ten years then made her decision to move to Milbank, SD, and has since resided.

She was preceded in death by her parents; husband; daughter, Virginia; two brothers; and two sisters.