featured3447
Cassidy Voeltz was raised on a farm near Big Stone City and graduated from MHS in 2018. She is currently a student at North... 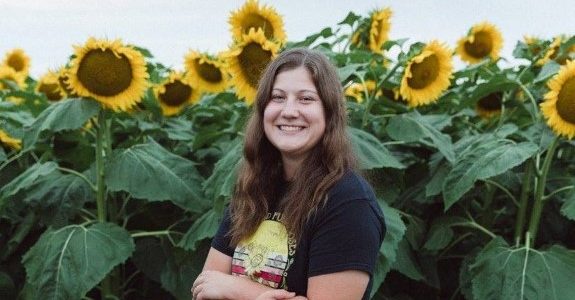 Cassidy Voeltz was raised on a farm near Big Stone City and graduated from MHS in 2018. She is currently a student at North Dakota State University (NDSU) in Fargo, North Dakota. She is pursuing a Bachelor of Science degree in natural resource management with an emphasis on rangeland ecology.

Voeltz says, “My dream job would be to work as a park ranger in Yellowstone National Park.” Just like Old Faithful, she exhibits perseverance. If she doesn’t decide to don a park ranger’s hat after she graduates in December, she has a myriad of options that await her. From jobs with the federal government to positions with private consulting firms and non-governmental organizations, or NGOs. She says, “I could also be a rancher or run my family farm.”

Voeltz recalls when she was younger, “I knew I wanted to pursue a degree in something related to the land, soil, plants, and animals. My interest developed from the time I was a freshman in high school, and I began taking agriculture classes from Mr. Jerry Janisch. Mr. Janisch convinced me to join FFA and the Floriculture Career Development Event (CDE) team. My favorite activity turned out to be the identification of plants and their materials.”

Her team placed first at the State FFA Convention in the Floriculture CDE, and advanced to the National FFA Convention in Indiana. Voeltz says,“That same year, I was recruited by Krecia Leddy to join the Grant County 4-H team which was preparing to compete in the South Dakota Rangeland Days in Chamberlain. The competition consisted of identifying range plants, ecological sites, and learning about natural resource management.”

The summer before she started college, she began working as a range technician intern for Soil Consultants, Inc. in Twin Brooks. For two summers she gained extensive knowledge of native grasses and plants, livestock production, biological control, endangered species, and prairie restoration. “At NDSU,” she says, “A few of my favorite classes were rangeland sampling techniques, ecological restoration, emergency management, and range plants.”

She explains how her specialization differs from botany. “Botanists focus on plant taxonomy (or classification) and plant identification. So, while I am not considered a botanist, I do have some overlap with them, as plant identification is an important part of rangeland ecology.”

After her freshman year at NDSU, she completed a plant breeding internship at the Sunflower and Plant Biology Research Lab at the Edward T. Schafer Agricultural Research Center-USDA in Fargo. She conducted independent research projects there for two summers.

The first summer, she was required to become a certified drone pilot in order to retrieve thermal images to study the canopies of the sunflower crop in correlation to yield potential. “By using digital imagery from the drone, we were able to access the percent and location of canopies and ground cover area. This was useful in determining the performance of different sunflower varieties at different growth stages.”

“The second summer, I studied the plant species silphium, commonly referred to as cup plant, regarding its potential domestication as a perennial oilseed and forage crop. Two main species (cup plant and rosinweed)  were used in the study and each had one beneficial quality. (It was determined) with a hybridization of the two species, the potential for an oilseed crop would be greatly improved.”

Although silphium grows worldwide, there are many species that do not grow natively in the United States. Voeltz says, “The silphium once used by the Greeks is now extinct because of its extreme demand and the fact that it was only found in certain areas.”

That area was a strip of land about 35 miles wide and 125 miles long near the city of Cyrene in ancient Greece. According to the BBC, “The plant eventually became worth its weight in gold. Perfume was coaxed from its delicate blooms, and its sap was dried and grated liberally over dishes from brains to braised flamingo.. Known as ‘laser’, the condiment was as fundamental to Roman haute cuisine as eating your food horizontally in a toga.”

The plant also had medicinal qualities and the BBC goes on to say, “Its juice was drunk as an aphrodisiac or applied ‘to purge the uterus’. It may have been the first genuinely effective birth control; its heart-shaped seeds are thought to be the reason we associate the symbol with romance to this day.” According to Voeltz, because early farmers were unable to cultivate silphium this also led to its extinction.

Not every variety of silphium is as finicky or captures the allure of the one grown in antiquity in Greece. Voeltz says the silphium that grows in South Dakota is “more closely related to the sunflower plant.” She says, “ It’s a part of the daisy family (Asteraceae) and it has yellow, composite flowers. Cup plant gets its name from the formation of the leaves which are in the shape of a cup and hold water that attracts birds and other wildlife.”

Voeltz says she believes, “(The plant) does have the potential to be domesticated for a perennial oilseed crop by using genetics.” She notes, “Silphium is a very deep-rooted plant and it attracts a wild variety of pollinators. The ecosystem services provided by it would allow for a sustainable crop. The domestication of today’s silphium is now being raised again, and I am interested to see if it will one day be used by farmers.”

It’s studies such as this that keep Voeltz’s work fascinating. She says if she were to encourage young students to grow up to be scientists, she would tell them, “You get to be hands-on with the things you study. A natural scientist gets to be outside, relate to the natural world, collect samples in the field, and learn new things every day. You also get to work in a lab and examine your studies so that you can get results and understand them more clearly.”

So last fall, when Leddy, who is also the district conservationist with Natural Resources Conservation Services (NRCS-USDA) in the Milbank field office, contacted Voeltz about an internship in the Milbank NRCS office, Voeltz  didn’t hesitate. According to Leddy, “NRCS, through their Pathways Program, offers internships to high school, undergraduate, or graduate degree-seeking students. She says, “The student must contribute 640 hours of work prior to graduation.The intern gains valuable experience and earns a wage while determining if federal service is a good fit as a career.”

Voeltz says, “Krecia explained to me that a Pathways internship was an unusual opportunity for Milbank. I applied, and this summer I am employed as a soil conservationist trainee at the NRCS office in Milbank.”

“One of the first training sessions I attended was a fire school. I learned how to create a plan for prescribed burn management. After I learned the logistics of the plan, I was given protective gear and the equipment to take part in a live fire demonstration.”

Since then, she has attended many other hands-on sessions.“Each training has taught me the importance of working together with farmers, ranchers, and landowners to conserve the soil, water, air, and other natural resources.

Although her work is generally related to agriculture and is highly scientific, the iconic pop artist Andy Warhol envisioned its greater scope. He mused, “I think having land and not ruining it is the most beautiful art that anybody could ever want to own.”