featured3447
Milbank baseball fans, including the Milbank Fire Department, showed up this morning to give the American Legion Post 9 team a celebratory sendoff.  Post... 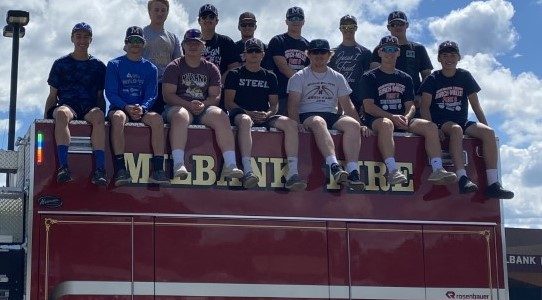 Milbank baseball fans, including the Milbank Fire Department, showed up this morning to give the American Legion Post 9 team a celebratory sendoff.  Post 9 is headed to the 2022 Class B Championships in Gregory.
Kellen Hoeke said, “It’s a great feeling and a credit to the team for playing well when it matters. Hopefully, we keep it rolling.” Isaac Schulte agreed, “Baseball always gets me pumped up when we’re playing good. As long as we play our best, we’re gonna have a fun time. But, I smell pheasant blood,” he said and laughed.

Milbank will face Redfield in their first game, which is the second game of the tournament which starts tomorrow and continues through Tuesday, August 2.

Post 9 punched their ticket to State last weekend in the Region 1B tournament when they defeated Castlewood 13-3, Claremont 10-0, and Big Stone 11-2. In game one against Castlewood, a big third inning propelled Milbank to a first-round victory. Bryce Lamp led off with a double to left field. Kaden Krause moved him to third with a sac bunt. Kellen Hoeke then scored Lamp when he pounded a double to center field. Milbank was off to an early lead at 1-0. Merik Junker ripped off a triple to center to knock in Hoeke and take the score to 2-0.

Isaac Schulte drew a walk. Mikey Karges came up to bat next and singled to center to score Junker and Schulte and bump Milbank’s lead to 4-0. Sage Locke was hit by a pitch to put runners on first and second with two outs. Karson Weber connected for a double to right to clear the bases. He helped add two more runs to Milbank’s lead. Lamp then singled to score Weber and increase Milbank’s lead even more at 7-0. Krause came up again and singled to right score Lamp and cap off an eight-run scoring streak. Junker hit a one-out double to start the bottom of the fourth. Karges singled to right to score Junker. Post 9 found itself sitting on a comfortable 9-0 lead after only four innings of play.

Weber kept things rolling in bottom of the fifth with a lead-off triple. Lamp singled to score Weber and Post 9 was ahead 10-3. Justus Osborn, Hoeke, Junker, and Schulte all drew walks to give Milbank 11 ticks.  Castlewood sneaked in three. Karges drove in a run after reaching on an error to give Milbank another insurance run and push the score to 12-3. Kaden Krause scored another again to invoke the 10-run mercy rule and end the game an inning early. Milbank notched the victory at 13-3. Post 9 cleaned up in the game against Claremont in the semi-finals like a scoring machine. Krause got the game started by drawing a lead-off walk. Hoeke tripled to center to score Krause and put Post 9 out in front at 1-0. Junker followed suit with a triple to score Hoeke and move the scoreboard to 2-0. Junker also scored after a ball got by Claremont’s catcher. Milbank held a three-run lead after the top of the first. At the top of the third, Hoeke launched a lead-off triple. Junker drove Hoeke home with a single to right to make it 4-0. Karges, Locke, and Lamp hit back-to-back-to-back singles to boost their total to six after Junker and Karges scored. Lamp crossed the plate when Krause doubled to left. Post 9 led 7-0.

Junker’s one-out single got the top of the fourth started for Milbank. He stole second and third and scored on Schulte’s sac fly. Post 9  was way out in front with an  8-0 advantage after only four and a half innings of play.

Osborn drew a walk to start the top of the sixth. Junker doubled to put runners on second and third with one out. Osborn scored when Schulte hit a sac fly. Post 9 remained ahead at  9-0 in the top of the sixth.Locke started the seventh inning with a lead-off double. Micah Sire came up to bat next and scored Locke for Milbank’s final run. Milbank took the “W” at 10-0.In the championship game, Milbank defeated Big Stone 12-2 to cement their spot in the state tourney. Krause earned the win on the mound.

Schedule for the first day of the double-elimination 2022 State Tournament:

Region 5B-winners Humboldt-Hartford of Posts 62 and 118 take on the Region 7B champion Winner-Colome Post 169 to get the ball rolling at 10 a.m. on Friday morning. Next up, Milbank Post 9, the champs of Region 1B, battle Redfield, the Region 6B winner at 5 p.m. Region 3B’s winner, Vermillion Post 1, plays Region 2B champs Dell Rapids Post 65. In the last quarterfinal game, Gregory County Post 6, the tournament host and  runner-up in Region 7B, meets the Region 4B champions Platte-Geddes of Post 115.
On Saturday, Milbank will take on the winner or the loser of game four between Platte-Geddes and Gregory.