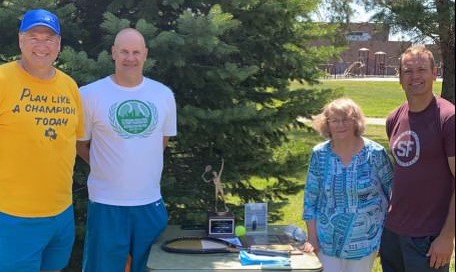 Zach Waletich, an MHS graduate who coordinated the tournament, said, “We were given perfect tennis weather conditions from Larry up above. The sun was shining, the temperature was just right, and we had a light breeze. I was amazed by the incredible turnout. We had 26 alumni of the Milbank tennis program back to participate.”

Waletich, who is now an assistant men’s and women’s tennis coach in the Owatonna School District in Minnesota, said, “I remember looking outside the courts during my first match and then talking with some of the guys during the changeover about how awesome it was to see so many Milbank community members had come out to watch and be a part of remembering Larry’s legacy.”

Waletich characterized the tournament as full of fun competition, upbeat music, big smiles, and positive people. He said, “Besides being a tennis guru, Larry was an even better person, and that was evident by the amount of people that came out in honor of him.” The all-doubles tournament included four rounds. Each round was played with a different partner. “It was neat to see the variety of matchups,” Waletich said. “We had an all-Cantine matchup, an all-Kurtz matchup, old high school doubles partners reunited, and so forth. It was a lot of fun!”

Waletich thanked the Milbank alumni tennis players who took time out of their weekend to come home and play in the tournament. He thanked Kevin, Greg, and Scott Cantine for all their help in making it a fun and memorable day for their dad.”

He gave a shout-out to Britta and Pat Waletich for making bars for everyone, and Val and Emily Waletich for capturing memorable moments in photos. He also thanked everyone from Milbank who came out to watch. “Everyone coming together made this all happen!” he said. “We look forward to continuing this annual get-together on the Saturday morning of Farley Fest each summer.”