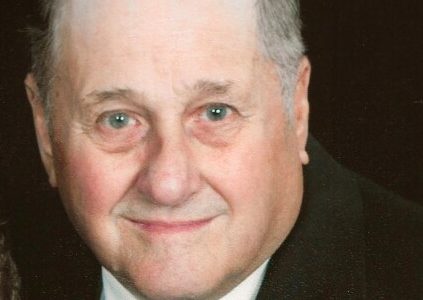 Leo Folk, age 91 of Milbank, SD,  passed away with his loving family by his side on August 9, 2022, at St. William’s Care Center in Milbank.

Mass of Christian Burial will be held on Friday, August 12, 2022, at 10:30 a.m. at St. Lawrence Catholic Church in Milbank. Father Gary DeRouchey will officiate and burial will be in the St. Lawrence Catholic Cemetery. Visitation will be held at the church on Thursday beginning at 5:00 p.m. followed by a prayer vigil at 7:00 p.m. Visitation will continue on Friday, one hour prior to the Mass.

Leo John Folk was born on January 12, 1931, on the family farm near Corona, SD, in Roberts County. He was the sixth child of 18 children born to Stephen and Barbara (Giessinger) Folk. Leo attended rural school at Genesco #4 through the eighth grade. He worked with his father on the farm until 1958, when he got married. He met Betty Lou Reynen at the movie theater, DeFea Theater in Milbank. Betty tossed popcorn at him and they began dating. They were united in marriage on June 28, 1958, at St. Lawrence Catholic Church in Milbank. They settled in Milbank and have lived their entire married lives there. They were blessed with two children: Lisa and Neil.

Leo worked for a short time for the Grant County Highway Department. He worked for Valley Queen Cheese Factory as a truck driver for seven years. He worked as an electrician for Dorale Electric for 20 years until it closed in the mid 1980’s. Leo worked for a short time at St. Lawrence Church and also did side jobs for people who asked him, which led to a job at Allied Service with Phil Nelson Electrical, Heating, and Plumbing. He worked at Angerhofer Plumbing and Heating for several years. Leo and Betty enjoyed driving around the community and Leo would proudly point out the many homes that he had worked on. He also worked on building projects with Earl Bohlen and Arlo Dockter.

When Leo wasn’t working, he enjoyed fishing, hunting, and watching the Minnesota Twins. He stayed very busy with side jobs and home projects. He enjoyed helping his neighbors. He also enjoyed woodworking and wood crafts. He made flower boxes and enjoyed gardening vegetables and flowers. He enjoyed watching and feeding the birds and squirrels in his backyard. There wasn’t anything that Leo could not fix! He loved to joke and make people laugh. He had a kind heart and always put others first. His children remember him going out after hours in blizzards and horrible weather to help someone who needed their heating or plumbing system fixed. Most importantly, Leo adored his family and loved every minute they shared together.

Leo was a faithful member of St. Lawrence Catholic Church.