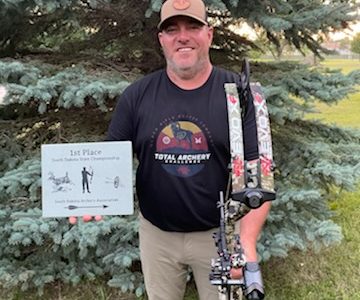 South Dakota’s 2022 Outdoor State Championship was held at Hartford Beach State Park Archery Range on Big Stone Lake from July 30-31. Bent Arrow Archery Range & Pro Shop of Milbank hosted the tournament. It was the first state tournament held at the new range, which was completed in 2021.

Josh Karels of Milbank won first place in the Adult Male Freestyle (AMFS) division with a score of 1060. Josh Anderson of Stockholm recorded a “Robin Hood.” A “Robin Hood is a feat named after the legendary archer and is claimed when an archer shoots an arrow into the tip of an arrow that is already in the target and splits it.

Veen says, “All proceeds from the shoot go to the Hartford Beach State Park Archery course for upkeep and improvements.”