Grace Marie Scheff entered into the presence of her Savior on the evening of August 10, 2022, at the age of 87. Funeral services... 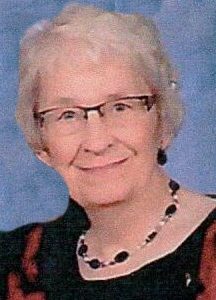 Grace Marie Scheff entered into the presence of her Savior on the evening of August 10, 2022, at the age of 87.

Funeral services will be held at 11:00 am on Thursday, August 18, at the Emanuel Lutheran Church in Milbank. Grace will be laid to rest in the Milbank City Cemetery.

Visitation will be from 4-6m Wednesday, August 17, at Emanuel Lutheran Church in Milbank.

Grace was the oldest child born to Henry and Henrietta (Poel) Schoon on February 20, 1935, in Milbank, SD. She met Robert Scheff at a street dance, with whom she would exchange letters during his deployment to Korea. The two were wed on May 1, 1955, after Bob’s military service was fulfilled.

The couple was married for nearly 60 years until his death in 2015. During that time, Grace and Bob welcomed two children, three grandchildren, and three great-grandchildren with whom they enjoyed spending time baking, working cars, and playing board games.

During her lifetime in Milbank, Grace enjoyed visiting with family, friends, and neighbors. She served others in many ways, including quilting for the church bazaar, the ladies Legion Auxiliary, and Meals on Wheels. Grace also cared for her parents in their old age and enjoyed caring for others with food and fellowship. In her time, she held many jobs, including telephone switchboard operator, babysitter, and clerk at Radeke Drug Store, Dan’s Pharmacy, and Bien Pharmacy.

Preceding her death are her parents, brother Benard (Shirley) Schoon, and brother-in-law Ed Strand. Coester Funeral Home in Webster is in charge of the arrangements.