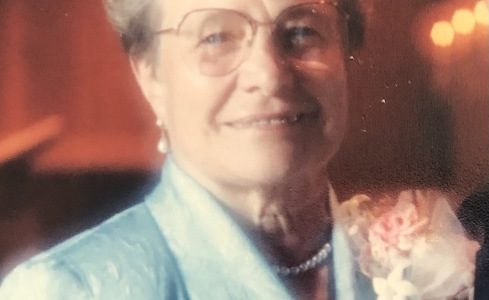 Elizabeth Margarite (Wollschlager) Radermacher was born on February 3, 1928, at home in Vernon Township of Grant County, SD, near Revillo, to Bruno and Agnes (Roggenbuck) Wollschlager. She grew up on the family farm and when  she was 16 years old Liz moved to Minneapolis and lived there until she was 21.

On June 25, 1949, Liz was united in marriage with Glenn Adolph Radermacher and the two made their home on a farm near Rosen, MN. Together, Glenn and Liz were blessed with 10 children. In 1983, Glenn and Liz moved to their home in Ortonville and remained there until Liz’s health no longer enabled her to live by herself.

Always a hard worker, Liz worked as a dedicated wife and mother to her family. She also helped Glenn with farm work and chores. When the children were all of school age, Liz went to work part-time for her sister, Lucy, as a waitress at the Ortonville golf course and also at Club 7-75.

Elizabeth was always doing things for her family and for other people. She was a proud member of St. John’s Catholic Church, St. Joseph’s Catholic Church, St. Monica’s Society, Christian Mothers, Bowl of Love, and Crafty Critters. Liz was gifted with sewing, quilting, and crochet and crafted many beautiful works. She enjoyed playing cards, crafting, and looking after her garden. Most of all, Liz loved golfing.

In lieu of flowers, the family requests memorials in Liz’s name be given to Alzheimer’s Association, Rice Hospice, or American Cancer Society.