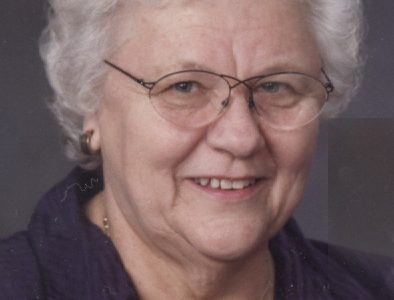 Jeannette Ruth Hogg was born September 12, 1934 in Brookings, South Dakota to Stanley and Grace (Brownson) Soule.  Jeannette passed away with her children surrounding her at the Fairway View Senior Communities in Ortonville, Minnesota at the age of 87.

Jeannette attended elementary school in Brookings and graduated from Faulkton High School in 1952.  after high school she attended the Methodist School of Nursing in Mitchell, South Dakota, graduating with a three year RN degree.  She worked in Panama for one year and then returned to Faulkton.

On December 8, 1956 she was united in marriage to Clairen Hogg and to this union four children were born: Patricia Ann, Robert Dean, Nancy Jean and Jerald Lee.

Jeannette was a life long member of the United Methodist Church and the VFW Auxiliary.  She was an excellent baker and was known for her Texas Brownies and Chocolate Chip Cookies, and could make a mean prime rib.

Jeannette was preceded in death by her husband, Clairen; her parents, Stanley and Grace and her sister, Barbara Soule.

Memorial services will be held on Saturday, September 3, 2022 at 10:30 AM at the United Methodist Church in Burke, SD.  Burial will be in the Graceland Cemetery, Burke.  Visitation will be one hour prior to the services at the Church.

Clausen Funeral Home of Burke, SD, is in charge of the funeral arrangements and will announce service times.