featured3438 sports-featured1514
Nancy Hoeke, head coach of the Lady Bulldogs volleyball team, has a lot of things in her favor this year. Experience is one. Only one... 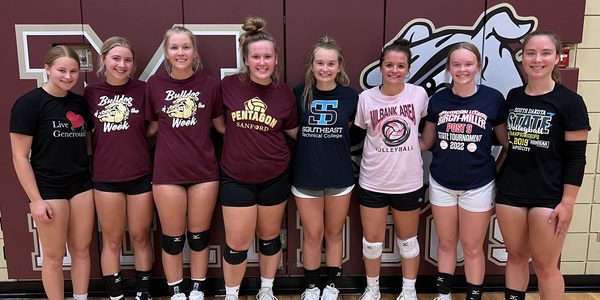 Nancy Hoeke, head coach of the Lady Bulldogs volleyball team, has a lot of things in her favor this year. Experience is one. Only one player from last year graduated in 2022, and the team now boasts eight seniors on its roster. Her 30 years as a coach, including 22 years as the head coach, also serves as an advantage.

Their spruced up facility is another thing she considers a real plus. “If you remember,” she says, “in 2021 we started our season in the elementary gym due to water damage to the armory gym floor. So, starting out in the high school, will finally feel like getting back to normal.  Our gym also received some updates to the scoreboards and fresh paint. it looks really nice and is a place I’m so proud of.”

In 2021, the Lady Bulldogs advanced to the second round of Region 1 play of the SDHSAA Class A volleyball tournament. This year, Hoeke says, “We continue to climb the ladder to be a contender in our conference and work to have a better than .500 season.”

What’s her plan? “We will look for the combination of players that are willing to play the game hard and compete physically and mentally,” she says. “We ended last season playing at a higher level, but it took time for us to believe in ourselves. We have to raise our game to the next level and believe in ourselves earlier in the season so we can win the tough matches.”
Along the way, she says, “We will continue to concentrate on strategy, being competitive, and playing with more intensity, purpose, and energy. We’ll take it game by game and work to meet these goals.”

Which team is their fiercest competitor? ​”Many teams in our conference have proven to be strong year-in-and-year-out, so those matches will be exciting battles. In particular, I expect Madison, Sioux Valley, and Deubrook to be tough.  All three of the tournaments we play in — Ipswich, Pentagon, and Milbank–  include excellent teams.”

The Lady Bulldogs varsity, JV, and C teams host their first home matches of the season when they face Sisseton on Thursday,  August 25.  The ball gets rolling at 5:15 p.m.