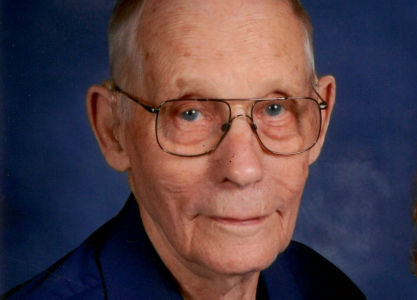 Goodwin “Goody” Youngren of Windom, MN, died on Friday, August 5, 2022, at the Sogge Memorial Good Samaritan Center in Windom. The former Milbank resident was a plumber for Trapp Plumbing and Heating, and also operated The Mill Motel in Milbank for many years.

A Celebration of Life service will be held at 1:30 pm on Friday, August 26, at the First United Methodist Church in Windom with visitation starting one hour prior at 12:30 pm. Burial will be at Memory Gardens in Windom.

Goodwin Andrew Youngren was born October 21, 1923 on the Youngren family farm in Dale Township north of Windom, Minnesota. He was the youngest of four children born to Gustaf and Esther (Anderson) Youngren. Goody received his early education at the Dale Township Country School and high school education in Windom, MN graduating in 1940. Goody served in the Minnesota State Guard from 1942 to 1945.

Goody was united in marriage to Audrey Goering at the First United Methodist Church in Windom, MN on January 31, 1954. This marriage was blessed with two children, Larry and Patti. Goody farmed from 1942 to 1965 near Windom, MN, Lake Park, IA and Round Lake, MN. The family moved to Milbank, SD in 1966 as they purchased The Mill Motel. The couple operated the motel business until 1978. Goody also worked as a plumber in Milbank, SD, initially for Johnson Plumbing and later for Trapp Brothers Plumbing from 1966 until he retired in 1990. In 2015, Goody and Audrey moved back to Windom, MN three months short of living in Milbank, SD for 50 years.

Goody’s “Jack of all trades” carried over to gardening, yardwork and various jobs at both the motel and home as well. Goody enjoyed taking in the athletic events of his two children and later the grandchildren.

After Goody’s retirement, he enjoyed creating woodworking projects. He made many wood items for Audrey and other family and friends.

Goody and Audrey were able to travel to all 50 states, Mexico and Canada. Staying connected with family was important. Many travel adventures included visits to the Goerings, Youngrens and Andersons. The Youngren-Anderson family events were a source of entertainment, fun, lots of tasty food and “now wait a minute” debates. They enjoyed 65 years together as a married couple making many memories. Goody will be remembered for always greeting you with a smile and a hand shake, ready to carry on a conversation.

Goody was preceded in death by his wife, Audrey in 2019; his parents; one brother Earl; and two sisters, Genevieve Danburg and Inez Youngren; and three double cousins, Donald Youngren, Vivian Carlson and Wendell Youngren.