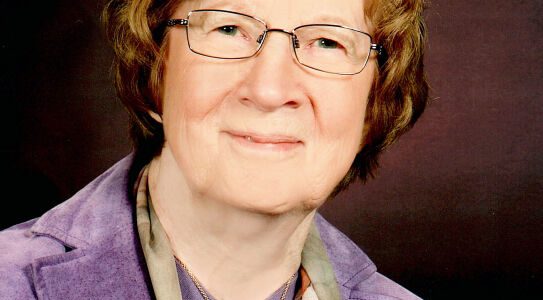 Funeral services will be held on Saturday, September 17, 2022, at 10:30 a.m. at Mundwiler Funeral Home in Milbank, SD. Visitation will be held at the from funeral home from 9:30 a.m. to 10:30 a.m. A time of food and fellowship will be held immediately following the service. Dr. Rev. DeVern Schwenn will officiate the service and interment will be at Corona Cemetery.

Phyllis Arlene (Miller) Harms was born on February 24, 1928, in Corona, SD, to DeLyle and Marion (Hooth) Miller. While she was in elementary school, Phyllis came down with a severe case of pneumonia. As antibiotics had not yet been developed, it was difficult to treat. She stayed with the doctor’s family in Wilmot, SD, to recuperate as her siblings were younger and she had a lot of responsibility caring for them.

Phyllis attended high school in Corona and graduated with the Class of 1946. Following high school, Phyllis attended what is now Northern State University in Aberdeen, SD, for her Teaching Certificate and worked as a rural school teacher in Kilborn Township of Grant County, SD, for three years.

On June 1, 1949, Phyllis was united in marriage with Harvey Harms. Together, they were blessed with five children. Phyllis worked hard as a farm wife, making a home, and raising her children until the late 1960s. She went to work for Whetstone Valley Nursing Home as a bookkeeper and Assistant Administrator from 1967 until 1974. Phyllis earned her Administration License and worked as the nursing home administrator at Wilmot Community Home from 1974 until 1987. She then attended Presentation College in Aberdeen, SD; she earned her nursing degree and then worked as a nurse at South Dakota Human Services Center in Yankton, SD, from 1989 until she retired in 2003. Phyllis and Harvey also hosted agricultural farm students from Germany and Austria for several years. They welcomed them into their home to let them experience farm life in the United States. Each one was special to them. In 2016, Phyllis moved into her last home at Trail Ridge Senior Living in Sioux Falls, SD, and she truly enjoyed living there.

After retiring, Phyllis was an avid volunteer for many organizations, including the Alpha Center, Sioux Falls Seminary, the VA Hospital in Sioux Falls, the Big Brother Big Sister program in Yankton, and Queen of Peace Hospital in Mitchell; each organization became an important part of her life. Phyllis also enjoyed hosting international high school exchange students during her retired years, and every one of them held a special place in her heart. Phyllis was active in her local churches, serving others. She participated in Bible study groups, Awana teaching, and valued forming close relationships with people. Above all, she loved her Lord and her family. She always looked forward to and enjoyed their visits. Her heart’s desire was that each of them knew Jesus Christ as their personal Lord and Savior.

When she wasn’t busy volunteering, raising her children, or keeping her home, Phyllis enjoyed reading and writing and was an avid seamstress, sewing many dresses for her daughters.

She was preceded in death by her parents; husband, Harvey in 1999; son, Kevin Harms in 2005; son in infancy in 1950; brothers: Milford Miller, and Don Miller; and sisters: Margaret Rohlfs, and Bonnie Schulte.