Aleda Trebil, age 83, of Ortonville, MN, passed away on Tuesday, September 13, 2022, Fairway View Neighborhoods. A Memorial Service will be held on... 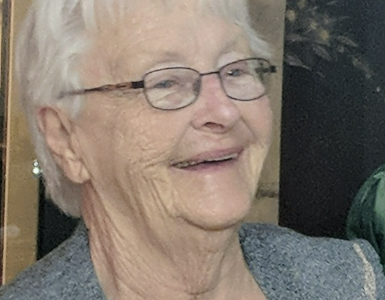 A Memorial Service will be held on Monday, September 19, 2022, at 11:00 a.m. at Mundwiler and Larson Funeral Chapel in Ortonville, MN. Pastor Lynn Thomas will officiate the service and a gathering of friends and family will be held at the Roelke residence following the service.

Aleda Leola (Block) Trebil was born on the eighth day of the second month of 1939. She was born to parents, Leo and Aleda (Hegge) Block at the Block family home Minnetonka Mills Township of Hennepin County, MN. Aleda attended country school until sixth grade at District #2 in Big Stone County and went on to attended high school at Ortonville Secondary. In December of 1946, the family moved from Minnetonka Mills to Eternal Springs Road, just north of Ortonville.

On October 27, 1960, Aleda was united in marriage with Richard “Dick” Trebil at St. John’s Catholic Church in Ortonville. The two moved to Oregon in 1963 for a short time, then moved to Red Lodge, MT, and returned home to Ortonville in 1966. Along their travels, Aleda and Dick were blessed with four children and with 56 years of marriage.

Always a hard worker, Aleda worked as a waitress at Hilltop Café where she met Dick and she agreed to a date with him. She always said she was fortunate to be able to stay home with her children until they were teenagers. Aleda went to work as a cook at Laguna Beach and later worked as a dietary cook at Northridge Nursing Home in Ortonville. Along with raising her family, Aleda raised a fantastic garden. She and Dick grew apples in a small orchard, raspberries from a vast raspberry patch, along with cucumbers and tomatoes.

In her leisure time, Aleda loved to play cards, attending her garden, and mowing the lawn. She was always happy being on her lawnmower. Aleda was a wonderful cook and baker, and especially enjoyed cooking for her family. She was an avid seamstress, sewing many jean quilts and pillows for her grandchildren. Aleda found relaxation in being an animal lover whether it was playing with her dogs, watching the birds come to her many birdfeeders, or talking to the deer that would wander through her yard. She had a great sense of humor although she said people never understood her brand of humor. Aleda liked reading, going to garage sales, was a collector of many things, especially enjoyed spending time with her family or going to one of Scott’s fish fries. She could walk along the beach for hours and loved walking with her dogs or her family.

Preceding her in death are her parents; husband, Dick in 2017; grandson, Keegan Roelke; and sisters: Elaine and Evelyn.