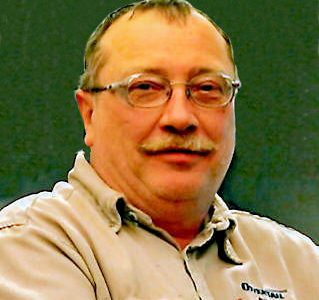 Tom fought a hard and courageous four-year battle with colorectal cancer, and even through the worst of it, he never gave up. He appreciated every minute of life he was given past his diagnosis and took each step with a remarkably positive attitude. Determined to beat the odds of his prognosis, he worked hard at his plan until the very end. He was extraordinarily brave in his fight, and he wanted us all to be. Because, after all, if we could ask him, he’d say, ‘I’m good, I’ll be all right.’

Thomas Louis Saeger, Jr. was born on June 5, 1963, in Ortonville, MN, to Thomas L. Sr. and Betty (Hogan) Saeger. He grew up in Ortonville, attending school at Ortonville High School and graduating with the Class of 1981. Following high school, Tom attended Detroit Lakes Tech School, where he worked on his education in electrical power. There, he met the love of his life, Kerri Buchholz, while attending school.

In early 1991, the family decided to move back to Tom’s hometown of Ortonville, where he gained employment as a Plant Trainee at the Ottertail Power Plant. He dedicated 30 years with Ottertail and ended his career as Chief Operator in 2022. He took pride in his job and never shied away from sharing his knowledge and his quick wit with his colleagues. While working in Kansas and Minnesota, he also served in the United States National Guard for 20 years.

Throughout the years, Tom enjoyed many things, including fishing off a dock or at the dam, camping trips with his family, playing pool, and all kinds of home improvement projects, big or small. He loved spending time in his large garage with his beloved little Yorkie dog, Scooter, watching football and baseball, hosting the upcoming game for his friends, and sharing his never-ending sense of humor.

Anyone who knew Tom knows that he was a generous soul and was always thinking of others. If you were lucky enough for Tom to call you a friend, it meant that you have a good heart; he was sincere in his friendships. Most often, he demonstrated this through his love for cooking. Whether it was grilling steaks or burgers, baking desserts for the grandkids, or bringing treats to the staff at the clinic, he always wanted his loved ones to have good food no matter what.

His ultimate pride and joy were his two children and four grandchildren; he spent as much time with them as he could by taking annual trips with Kerri to Colorado, Wyoming, and Northern Minnesota. When visiting, he would, of course, cook and prepare meals but also hit the trails four-wheeling, enjoy lots of laughs, and spoil everyone to no end.

Preceding him in death were his parents, his father-in-law, Myron ‘Buck’ Buchholz; his mother-in-law, Carolyn Buchholz; and his sister, Julie Saeger.