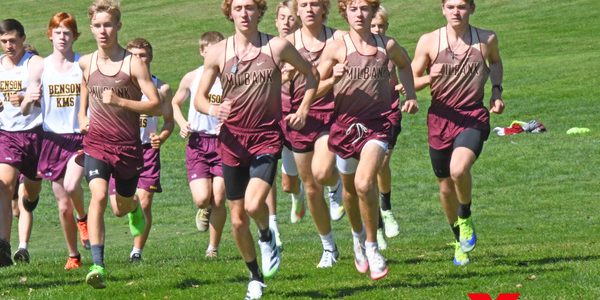 Eric Townsend, head coach of the Bulldogs’ and Lady Bulldogs’ cross country teams, said, “The Charger Invite in Sioux Falls[September 13] was a great opportunity to compete against mostly Class A schools around the Sioux Falls area.  Both teams competed hard and had great performances.” The girls secured second place only yielding to Sioux Falls Christian. The boys brought home third place, just behind Sioux Falls Christian and Sioux Falls Roosevelt.  “This meet showed we can compete with many of the better Class A schools in the state,” Townsend added.

Varsity Girls -5K Race Freshman Ashlynn Batchelor was the first Lady Bulldog to cross the finish line at Yankton Trails in Sioux Falls. She came in at 19:37.15 for third place. Sioux Falls Christian’s Ellie Maddox, also a freshman, was the winner and had finished at 19:21.82.

JV Boys – 4K Run Freshman Jack Howard was the first and only Bulldog on the boys’ JV squad to cross the finish line. He clocked in at 17:43.44 to earn 49th place.

Team standings included:  (1) Sioux Falls Christian; (2) Dakota Valley (3) Lennox
Coach Townsend noted Milbank did not participate in the Huron Invitational scheduled for Saturday, September 17. What’s next for the cross country runners? The Bulldogs and Lady Bulldogs traveled to the Lac qui Parle Valley Invitational in Madison, Minnesota, on Tuesday, September 20. They are on the road again on Saturday, September 24, to compete in the Border Battle in Grand Forks, North Dakota.