featured3449 sports-featured1525
Sammy Femling fired in an 88 to tie for sixth place during the Sisseton Invitational at Valley View Golf Course on Thursday, September 22. ... 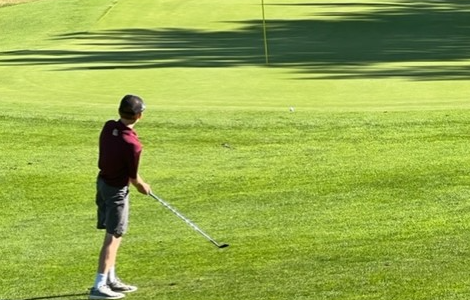 Sammy Femling fired in an 88 to tie for sixth place during the Sisseton Invitational at Valley View Golf Course on Thursday, September 22.  Owen Fischer and Jonathan DeBoer each shot a 91 to land in a five-way tie for 11th place.  As a team, the Bulldogs ended up in third place behind Watertown and Sioux Valley.

MHS Coach Mark Keeton said, “This was our last tune-up before Regions. Thankfully, this time around there was no fog, and it was one of the more pleasant days I can remember on the course.  The boys performed well with five out of the six finishing under 100.  Senior Sammy Femling led the team. He posted his first competitive round under 100 with a very solid 88.”

Bulldog Joshua Keeton carded a 94 for 20th place and Charlie Peery followed in a tie for 21st place at 95. Greg Grabow earned a 34th-place finish with a 113.

Jonathan DeBoer was the highest-ranking Bulldog golfer. He tied for 46th place at 14 over par with an 86. Owen Fischer tied for 70th place at 94. Joshua Keeton carded a 99 for 74th place, and Greg Grabow and Sammy Femling tied for 75th place at 100. Charlie Peery posted a 102 to come in at 78th place. Coach Mark Keeton commented, “The boys played the yellow and the red course at Cattail Crossing Golf Course, and they had the boys tipped out playing the blues. I thought the boys played well considering we were hitting some longer irons. Looking back to last year, we shaved 41 strokes off our team score posting of 379.