featured3438 sports-featured1514
It was an exciting day on the golf course at the Region 1A tournament in Aberdeen on Monday, September 26. Milbank teammates Owen Fischer, Jonathan... 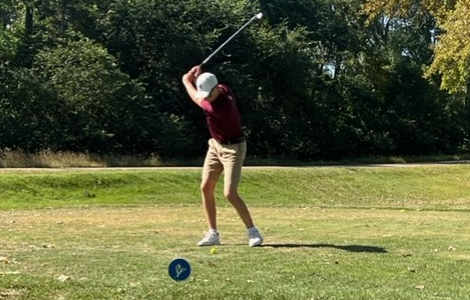 It was an exciting day on the golf course at the Region 1A tournament in Aberdeen on Monday, September 26. Milbank teammates Owen Fischer, Jonathan DeBoer, and Joshua Keeton each qualified for the state tournament. The Bulldogs as a team put up their best score of the year to earn fourth place, and the winning golfer was determined by a great shot in a tie-breaker.

Mark Keeton, head coach for MHS, said, “I am extremely proud of the boys for posting their best team score of the year with a 344. That’s 44 strokes better than last year and would have won the Region in 2021.  We just missed qualifying as a team by one stroke to Groton. We played our best when it counted the most and that’s all I can ask for. Plus, Moccasin Creek and the weather treated us to a great day.”

Kyan Overby of Sioux Valley was the medalist. After he ended in a tie at 78 with Kaden Bursheim of Flandreau, Overby won it all with a birdie on the first playoff hole.

MHS golfer Charlie Peery, a sophomore, missed qualifying for state by just one stroke. He shot a 93 and landed right behind Mayson Rise of Tri-Valley at 92.  Rise was the last player to make the cut. Sophomore Greg Grabow also contributed to Milbank’s fourth-place finish with a score of 107, but he did not qualify for state.

What’s next? The Bulldogs head back to Aberdeen on Monday. The Boys’ State A Golf Tournament takes place at Moccasin Creek Golf Course on October 3-4.