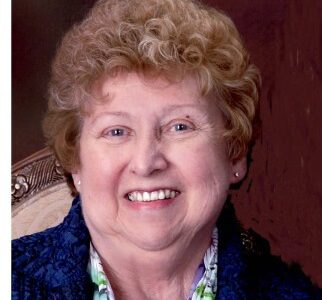 Funeral services will be held on Friday, October 21, 2022, at 10:30 a.m. at Hope Lutheran Church in Summit, SD. Visitation will be held on Thursday, October 20, from 5:00 p.m. to 7:00 p.m. at the church and will continue one hour prior to the service at the church on Friday. Rev. Janet Miller will officiate, and interment will be at Osceola Cemetery #1 in Marvin, SD.

Karin was born on September 2, 1941, the only child of Jess and Dorothea (Schroeder) Brown in Ortonville, MN. She attended and graduated from Milbank High School. After high school, she attended business school in Minneapolis, MN. After graduation, she returned to Milbank where she was employed at Milbank Mutual Insurance for several years.

Karin met Richard (Dick) O’Farrell in Milbank and they were later married on March 24, 1962, at the American Lutheran Church in Milbank, SD. They made their home in the Marvin, SD area where Karin stayed home to raise their children. She provided many delicious meals and lunches for the workers of the O’Farrell Ranch throughout the years. She was also a Visiting Neighbor where she would help those with their in-home care needs.

Karin was a member of her local Red Hat Society and loved her water aerobics group, whom she referred to as her “Swimmin’ Women”. She enjoyed spending time with these friends and also with her Tuesday Morning Coffee group friends. She loved to crochet, sew, feed and watch her birds, garden and she raised the most beautiful flowers. She was an avid reader of all things. Her bible was always on her kitchen table where she enjoyed her coffee and morning devotionals. Her morning coffee ritual was always accompanied by snuggles with her dog, Chloe, and cat, Munchkin.

Karin’s grandchildren were her pride and joy and she loved them dearly. She had a way of making them each feel so special. Birthdays and holidays were extra special with Grandma Karin’s homemade Spritz cookies and sugar cookies. She loved attending high school and college sporting events to support her grandchildren. Karin enjoyed traveling and taking vacations with her children and grandchildren. Some of her favorite destinations included the mountains in Colorado and the Black Hills.

Karin was preceded in death by her parents, husband, and sons: Robert and Lee.