featured3438 sports-featured1514
The Milbank wrestling team split its quartet of dual contests on December 3 at the Marv Sherrill Dual Tournament at the Watertown Civic Arena.... 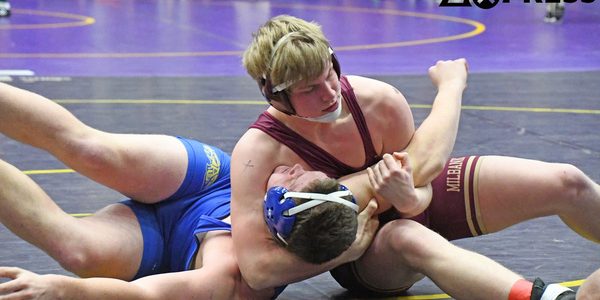 The Milbank wrestling team split its quartet of dual contests on December 3 at the Marv Sherrill Dual Tournament at the Watertown Civic Arena.

The Bulldogs lost their opening dual against Aberdeen Central with a score of 21-55. MHS head coach Josh Schmeichel commented, “Aberdeen has been tough traditionally and we had four open weight classes, so we knew it was going to be a challenge.”

Schmeichel said, “Owen Fischer started us off with a win at the 106-pound weight class.”  But then, Milbank put up a couple of losses and three forfeits.  “Brayden Christensen lost a very close match to the No. 2-ranked wrestler in the state.” Schmeichel noted. ” After the match, I found out Brayden wasn’t feeling the greatest, but he didn’t want that to be an excuse for not wrestling.”

Schmeichel said he thinks if the two wrestlers meet again, there is a good chance that outcome will be very different.

In their second match, the Bulldogs secured their first dual win of the season with a score of 48-36 against Yankton. ” I knew going in we had a shot at winning this one,” Schmeichel said.

“We started off at 113 and received a forfeit. From there, we lost or gave up forfeits until Jacob Johnson got a pin at 138. With Brayden sitting out, rookie Jesse Rutherford stepped up to get us a forfeit at 145. When we reached the 170-pound weight class, we were down 18-30.”

Their final match in pool play was against Tea. Tea had defeated Aberdeen in the previous round. “So we knew this one was going to be another tough one,” Schemichel said. “That didn’t stop us from going out there and competing. Even though we ended up losing 60-23, I think we went out there and competed harder than we had the rest of the day. Tea went on to win the tournament with a victory over Watertown at 41-31.”

Milbank’s final dual was in the placing round. The Bulldogs faced Canby from the other pool. Milbank hoped to squeeze out another win, but it didn’t happen. However, Schemichel said, “Owen, Nollen, Tate, Barrett, and Jesse all ended up with pins and the other boys went out and competed.”

Schmeichel said overall he is pleased with Milbank’s success at the tournament and so far this season.  He cited the challenges of having some open weight classes and how he determined after the tournament two other MHS wrestlers weren’t feeling 100 percent either, but wrestled the whole day.

On the plus side, he mentioned Owen, Jesse Schneck, and Barrett Schneck all ended the day at 4-0, and Jesse racked up four pins. Jesse, a sophomore, now holds a 5-0 record — all pins. “One of those pins was against the currently fourth- ranked wrestler in the 220-pound weight class,” Schmeichel added.

“Although we took some lumps at this tournament, I think we all ended the tournament with positive attitudes and are ready to do what it takes to improve,” Schmeichel concluded. “It was fun having Coach Winter by my side with all of his enthusiasm. He even made a big list of things for us to work on to get us ready for Rapid City on Friday.”

The Bulldogs are on the road to compete in the Rapid City Invitational at the Rushmore Plaza Civic Center on Friday, December 9.