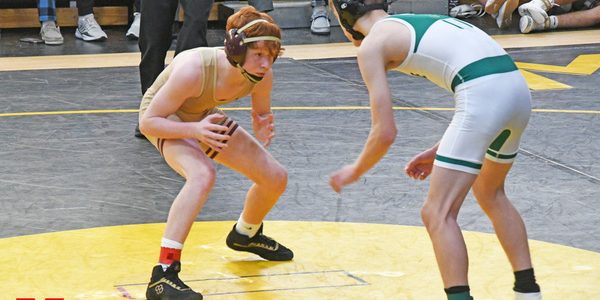 According to Josh Schmeichel, head coach for the Bulldogs, the tournament is designed with only four individual place winners. Even so, Schmeichel said, “We were able to get three wrestlers to place.”

The competition was dotted with many of the top-ranked wrestlers in the state, and Schmeichel said, ” The Bulldogs went out, competed, and left everything they had on the mat every match. As a team, we ended up with sixth place out of 10 teams, but we lost to five ranked teams in Class A and B.”

Schmeichel also commented on some of the successes and challenges at the tournament. “Barrett didn’t have any troubles winning his way through the tournament and beating the No.2-ranked wrestler along the way. He started off with a pin, then a major decision in the semi’s, and finished it off with a pin in the first period in the finals. Brayden started off with a pin and a major decision on his way into the finals. In his finals match, he fell just short to another ranked wrestler at 4-5. This put Owen in the Class A rankings at No. 8.”

Schmeichel said Owen had shown up to compete. “Despite getting beat by the No. 1-ranked Class A kid in the state, Owen came back and wrestled his way to a third- place finish, He beat the No. 6 -ranked Class A  wrestler along the way.”

He said Landon’s match to make it into the placing round was an exciting one. “The wrestlers were tied with 10 seconds left in the third period. Landon got a takedown, but with only three seconds left, his opponent got a reversal to tie it back up and take it into overtime.”

What’s next for the Bulldog wrestlers?  Milbank goes on the road to Watertown for a dual on Thursday, January 19.