featured3323
Mary and Ralph Scott might not have had biological children, but Mary had about 50 kids every year. Mary, who celebrated her 97th birthday... 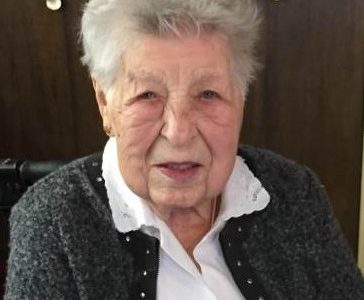 Mary and Ralph Scott might not have had biological children, but Mary had about 50 kids every year. Mary, who celebrated her 97th birthday in January, taught kindergarten and first grade for 34 years at Koch School in Milbank.

If you ask generations of Milbank alumni, “Who was your kindergarten teacher?” The odds are high they will say Mrs. Scott. Now, she has established the Ralph and Mary Scott Scholarship to insure others who share her love of teaching get the schooling required to fulfill their dream.

“This May, the first Ralph and Mary Scott Scholarship will give $2500 to a future teacher. The scholarship will be awarded annually in perpetuity. It will be fostered by the Milbank Educational Foundation and structured to keep the principle intact and use the investment income for the scholarship.” stated Craig Wellnitz of the Milbank Educational Foundation.

Mrs. Scott, as she is still most commonly known as, said, “I loved teaching. This is my way of letting someone else enjoy it, too.”

Although the student chosen for the scholarship might share Mrs. Scott’s passion, their journeys – 80 years apart- will most likely differ. After Mrs. Scott graduated from high school in 1938, she attended college classes at Aberdeen Normal School – now known as Northern State University. Her college tuition totaled $500 for the year. She lodged with a junior high instructor and cooked meals for her. She paid her landlady 50 cents a week for the sofa she slept on and a dresser that housed her belongings. “It was good,” she said. “I had a friend who lived upstairs with the music teacher.”
Her training lasted one year plus the student teaching requirement of six weeks, which she performed at a country school. Her first job was also at a country school outside of Milbank. “The schoolhouse was old and dilapidated. One window was missing and a piece of cardboard was wedged in to replace it,” she said.” “I built a fire each morning and a student carried in a pail of water.”

She was paid $65 a month to instruct about a dozen pupils in various grades. She rented a room from an older couple for $20 a month. Each day, she packed a sandwich and walked a mile to school. “One day, she recalls, “We had a huge blizzard and I got stranded alone all night in the school. “I was terrified,” she said, “but the kids made it home safely.”

The incident didn’t deter her from continuing her career. She stayed nine years, and during her tenure there, she received several pay raises. Her salary rose from $65 to $70, and finally climbed to $85 per month.

She then transferred to Corona and taught the lower grades for two years until she accepted a position in the Milbank school. She remained employed in Milbank for 34 years, teaching both first grade and kindergarten. The Koch School building was built her second year, and she said she still remembers the thrill. “The room was beautiful; the new toys were amazing!”

At Koch School, her wages steadily increased to $5,000 a year and class sizes grew from one classroom with 13 to 30 students to two sessions with 25 to 28 students attending half-day kindergarten. “There was no curriculum so I made my own,” she said. “We studied reading, science, and numbers. And of course, manners.”

Mrs. Scott now resides at Park Place where she reads a book a week and enjoys doing crossword puzzles. She said another favorite activities is “looking out her window at Park Place and watching the school buses return to the garage each evening.” But she is also eagerly anticipating the scholarship event. She said, “I am so excited to find out the name of the first recipient!” The Ralph and Mary Scott Scholarship will be awarded May 3, at the Milbank Educational Foundation banquet.