featured2995
If you overheard someone say, “It’s super if the kids want to blow things up!”, you might be inclined to call the police. But...

If you overheard someone say, “It’s super if the kids want to blow things up!”, you might be inclined to call the police. But Wayde Fraasch always adds, “In the defense of our country, of course!” Wayde’s dad, Doug, probably said the same thing to him.

Doug Fraasch joined the Air National Guard on January 22, 1996, the first in his family to serve in the armed forces since his great uncle was in WWI. But Doug got the caissons rolling again, and his son Wayde, Wayde’s son, Elijah, and his daughter, Brooke, have all signed up to be soldiers.

Doug says he enlisted in the Air National Guard because he didn’t want to be shipped to Vietnam. He was assigned to basic training in San Antonio, but spinal meningitis had broken out at Lackland Air Force Base and he was sent to Amarillo instead. Historically, it had been an eight-week course, but the government was in the process of shutting the base down and had to reopen it. He says, “I spent four weeks there and during that time I had seven different training instructors. After that, I did OJT (On the Job Training), and then came back for a position with the Air Guard as a technician. I did that full time for 11 years. I stayed in the military until Dec. 31, 1989 — just short of 23 years. I was fortunate enough to rise through the ranks and made it to E9, the highest enlisted grade possible.” 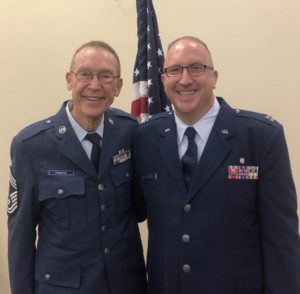 Those 23 years gave Wayde a chance to decide his dad had chosen a pretty exciting career. Wayde says, “I was surrounded by the military since I was born. Once in a while, I would go with my dad to a guard drill weekend. They had a C-130 trainer and sometimes he would hook me up to go flying. I think I always had the intention of going into the military. One day, a Navy recruiter was at our house trying to convince my brother to join, but he ended up with me instead.”

“I was in the Navy for four years of active duty. Loved it. Got to tour the world. Spent two years in Okinawa, Japan. I left after the first Gulf War. They were freezing ranks and downsizing so I got out, attended NDSU, and met my wife, Amber. But I kept thinking about how much I missed the military. So I joined the Army Guard.”

“I transfered from Fargo to the Ortonville unit which was a field artillery unit,” he says. “I was considering the commercial or civilian side of life. One of Amber’s cousins was in the 934 in Minneapolis, and I transferred from the Army Guard to the Air Force Reserves. Loved every minute of it. Went to tech school for 13 weeks at Shephard Air Force Base, then five months to Omaha for on the job training.”

“I started moving through the ranks, and after I completed nursing school, I crossed over from tech sergeant. I had plans of staying in the military, but they medically retired me when I was diagnosed with brain cancer. I wish I could have stayed until I was 60, but I finished on August 14, 2018.” 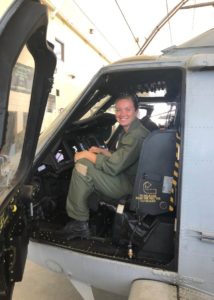 And Brooke is well on her way. She started her career in the summer of 2017 at the US Naval Academy. After completing her freshman year, she served as a seminar detailer, introducing high school seniors to the academy and traveled as a mentor on the “youngster cruise” to Honolulu, Hawaii for RIMPAC. RIMPAC (Rim of the Pacific Exercise) is the world’s largest international maritime warfare exercise. This year, 26 countries have planned to participate.

Brooke says, “I was scheduled to go to Colombia, South America for a research trip this summer and then obtain my private pilot’s license. It was also supposed to be the second half of bringing in the freshmen, but because of COVID, the first block got canceled. And no trip to Colombia! This is considered my senior summer so I’m supposed to do training based on what I want to go into. I added Leatherneck because PFP was canceled. (Leatherneck is a four-week training session in Quantico, Virginia for midshipmen interested in the Marine Corps. It is the primary evaluation for Marine Corps candidates from the US Naval Academy. PFP is the academy’s summer Powered Flight Program which teaches midshipmen how to fly.)

Brooke says, “So, I’ll be leaving. First, to quarantine at school for two weeks, then three weeks in Quantico. We’ll do marches, a mock town, strategize, and see what being a Marine would be like.”

“After I get done with Leatherneck, I get to do Plebe Summer again as a detailer. Plebe Summer starts with Induction Day. On I-Day, all the candidates say goodbye to their parents, enter Alumni Hall, and are greeted by upper-class trainers, known as detailers. The detailers start by requiring the plebes to address them with Sir or Ma’am “sandwiches” (e.g. “Sir, yes, sir”). It’s going to be much different this time, though, because of COVID,” Brooke says. “Four weeks. More intense. I’ll also be more in charge of things this time. I’ll be an XO or executive officer – a combo of a platoon commander and the executive officer.”

“I’ve been accepted into the honors program for poly-sci, so I’ll be working on that this fall. Service selection happens before Thanksgiving. I’ll find out what I’m doing after I graduate. First choice – Navy; second choice – Marine Corps pilot. Graduation is May 28, 2021. Then, I have a five-year obligation to fulfill.”

Brooke’s brother, Elijah, says, “When I first began to speak, I knew I was going to be in the military. It was amplified when dad took us to Family Days at the air base.

Wayde also recalls taking the kids to Family Day. ” They would get to see guns and equipment and the chance to crawl through a C-130. Elijah really gravitated to the fire trucks and loved shooting the fire hose. Elijah laughs and adds, “There‘s a picture of me wearing a Kevlar vest and a helmet holding a M4 with a grenade launcher attachment.”

But he selected the National Guard and heads to Fort Sill on July 15 for basic training. He says some of his local buddies from the Guards — Elijah Siem, Thomas Steltz, and Chandler VanHoorn — will be in military training, too. Thomas is at basic now; Chandler goes to AIT (Advanced Individual Training) soon; and Elijah S. was supposed to leave, but COVID delayed him. 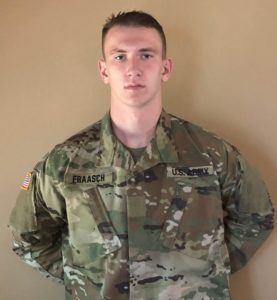 After Elijah F. finishes his 10-week training he goes directly to San Antonio for 16 weeks of combat medic training. he says, “I get done about mid October and stay in Texas till about February. I’ll come home then until I start school at USD next fall. Upon graduation, I hope to commission as an officer with an MOS (Military Occupation Specialty) of 68 Whiskey (a US Army combat medic).

Wayde says I did a lot of training with 68 Whiskey as a combat medic in the Air Force. Those guys know their stuff!

Elijah was originally going to be a Marine, but the Marine Corps requires a four-year active duty commitment after basic training and I didn’t want to wait that long to go to college. The National Guard offered direct access to schooling and they pay for a good portion of it. Those were the two big deciding factors for me.”

Elijah says, “It was also a highly debated topic (with my parents) about what my MOS would be. I wanted to be a combat engineer — a plus side to that was no AIT after basic. I could be done by Thanksgiving. But a recruiter told me there was an opening for a 68 whiskey in Vermillion. And that worked out in the end because my unit will be in Vermillion and that’s where I’ll be going to school.
He says he will major in nursing at USD. Then take a year or two off from school before going to graduate school to become a nurse anesthetist.

His dad interjects, “If that’s the path he wants to do, I’m all for it – he chooses his own path!” He says Elijah reminds him of himself when he weighs the choices and considers switching branches.

Elijah says, “I can use my training and schooling for military or civilian jobs, but I hope to stay in the military until I am forced to retire. I intend to go as far as I can!

Wayde says, “Whatever your job, everybody plays a role in providing defense and doing what we need to do for the country. I find that’s a lot of fun. It’s also amazing the responses you get from people who appreciate what we do.”

Doug says traveling was a big part of his enjoyment. During my service, I went to Savannah, Georgia, Hawaii, England, and different parts of the country. “If you apply yourself,” he says, “you can get in on those trips.”

Not to be outdone, Wayde lists Europe, Saudi Arabia, Germany, France, Singapore, North and South Korea, Japan, and Hawaii as some of the places he visited. ” And,” he says, “the people you get to meet! It was also rewarding to work with the wounded and listen to their amazing stories. Quite an experience. I wouldn’t change it. Seeing and working with the different cultures makes you a bigger and better person. There’s definitely a lot of camaraderie, too.” 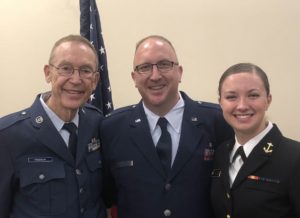 But now that the family includes several different branches and the list continues to grow, the teasing rarely stops. Wayde says it’s all in friendly competition. If it came to a fight, there’s nobody I would want next to me more than a Marine or someone from the Navy. We just raz each other all in fun.”

Brooke, always the diplomat says, “But each branch is dependent on each other in a war. You need each other to survive. But yeah, it sure sounds like sibling rivalry.”

And that rivalry was never more intense than when they all went to the Army/Navy football game. No injuries were reported on the field.

Wayde concluded that they all feel the same way about America and Freedom, “It’s all about the bigger picture.”