featured3188
Today, July 28, is Alphonse Joseph Holtzmann Day in Milbank. The day was set aside by Milbank’s mayor, Pat Raffety, to honor Holtzmann on... 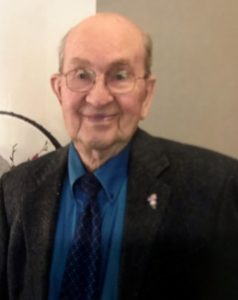 Today, July 28, is Alphonse Joseph Holtzmann Day in Milbank. The day was set aside by Milbank’s mayor, Pat Raffety, to honor Holtzmann on his 100th birthday.

Joe, as he was usually called, was born in Highmore, South Dakota, but resided in Milbank since 1972. He and his wife, Alice, moved to Milbank when Joe was hired to establish the print shop at Blue Cloud Abbey. Joe continued to serve as the printer and publisher for the Abbey until he retired in 2000.

During World War II, Joe enlisted and served in the US Coast Guard from April 1942 until January 1946. He shipped out shortly after the attack on Pearl Harbor aboard the USCGC Manhasset to patrol and search for German submarines in isolated areas between Newfoundland and Iceland. The Manhasset was equipped with specialized meteorological instruments and it joined the weather patrol in the North Atlantic to gather vital weather information for the Allies. Joe has been a long-time member of the American Legion Birch-MIller Post 9 in Milbank and served as its commander from 2000-2001.

In April 2016, Joe and Alice celebrated their 70th wedding anniversary. Together, they raised nine children: Mary Jo, Larry, Jeannie, Bob, Roger, Margaret, Barb, Susan, and Beth. Alice passed away in 2016, but their children are planning a birthday celebration this weekend at St. William’s Care Center, where Joe now resides. St. Williams is closed to the public due to COVID-19, but let’s not let that stop us from celebrating. Wherever you are, let’s all raise an ice cream cone —one of Joe’s favorite foods — in salute of 100 years well lived.