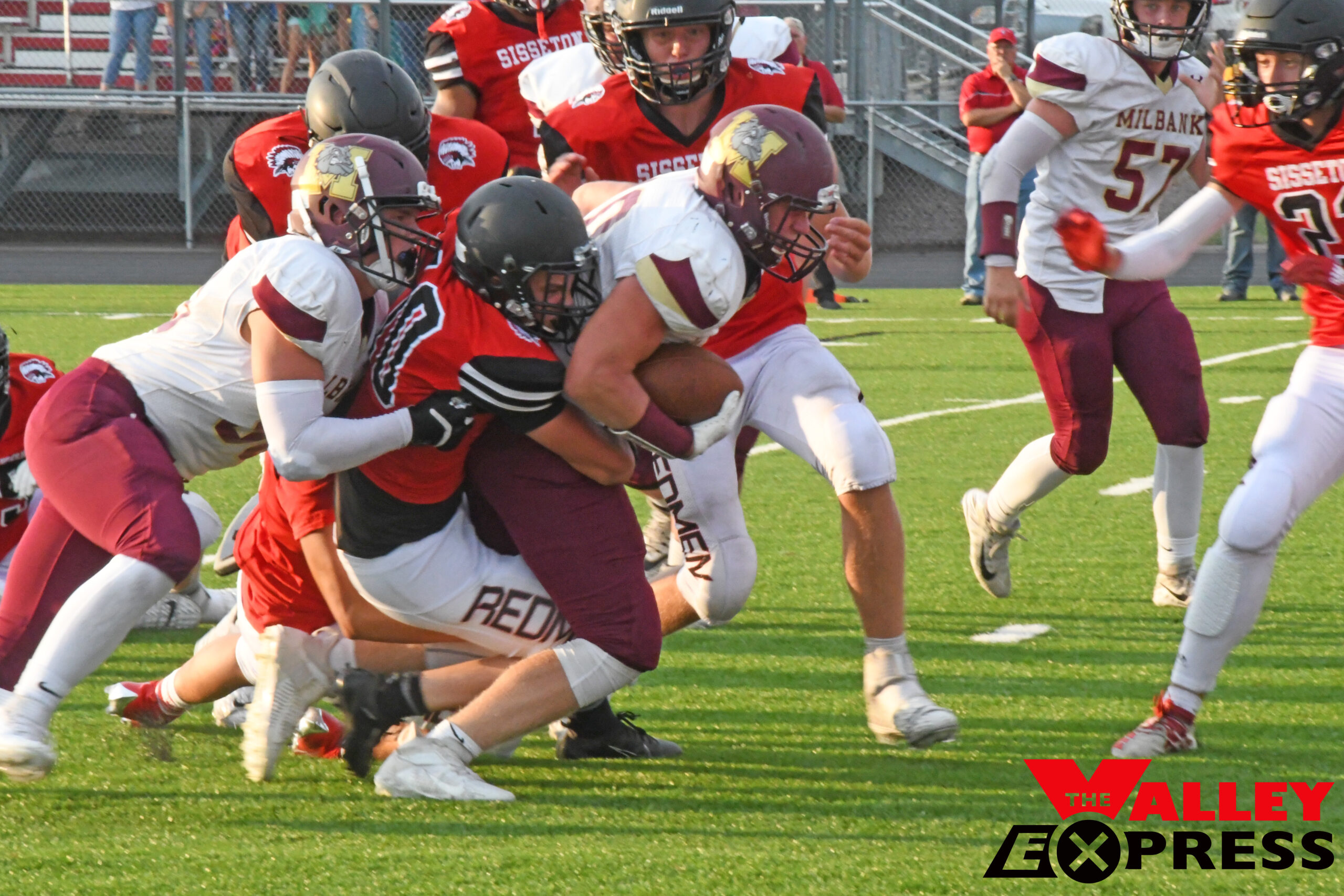 Brian Allmendinger, new head coach of the MHS football team, collected his first win with an 18-6 victory over Sisseton. The Bulldogs defeated the Redmen on Friday, August 21, on the road.

“I was very pleased with how the team played,” said Allmendinger. “We played great defense, tackled well, and were physical. On offense, we ran the ball very well behind great play from our O-line.”

Milbank started the scoring with a three-yard touchdown run by Marshall Voeltz in the first quarter. The two-point conversion failed. Neither team scored during the remainder of the first half.

Voeltz again found the end zone in the third period with another three-yard touchdown run. The extra point kick by Parker Schell was no good, but Milbank remained ahead 12-0.

Voeltz again found paydirt in the final quarter with a five-yard run to score and widen the gap to 18-0. Sisseton had the last word with a 34-yard touchdown pass to bring the final score to 18-6.

Voeltz led the Dawgs with 159 yards on 31 carries and three touchdowns. Bennett Schwenn added 68 yards on 10 carries and 24 yards on one catch. Quarterback Kaden Krause connected on 4-of-8 passing for 42 yards and scurried for 18 yards on eight carries. Mike Karges tallied 10 yards on two runs.  Sawyer Gauer had eight yards on three totes and 18 yards on threereceptions.

“I felt our defense, offensive line, and Marshall Voeltz’s running the ball were the highlights of the game,” stated Allmendinger. “The guys also played with fire and intensity. I was excited and a little nervous to get the season started, but we are looking forward to this team and players rebuilding a winning tradition and getting back to having fun playing a great sport.”

“I expect these guys to be leaders on and off the field,” says Allmendinger. “I have already seen some good things from them.”

“We are excited to get started,” added Allmendinger. “Our goal is to be fundamentally sound in all three phases of the game, exhibit positive attitudes and effort throughout the season, and get better day by day. We are hopeful everyone stays healthy, can play a full season, and can maintain a sense of normalcy.”

Milbank hosts Wahpeton, North Dakota, for its first home game of the season on Friday, August 28. Kickoff is 7 p.m.

Photo – Marshall Voeltz (with the ball), with help from Leyton Raffety (behind), gets pushed into the end zone for the first touchdown of the game on Friday night.