Dawgs Attack the Bearcats For A Win

featured3386 sports-featured1487
The Bulldogs dominated the field during their football game with the Webster Bearcats on Friday, September 25, on the road. Milbank took the win... 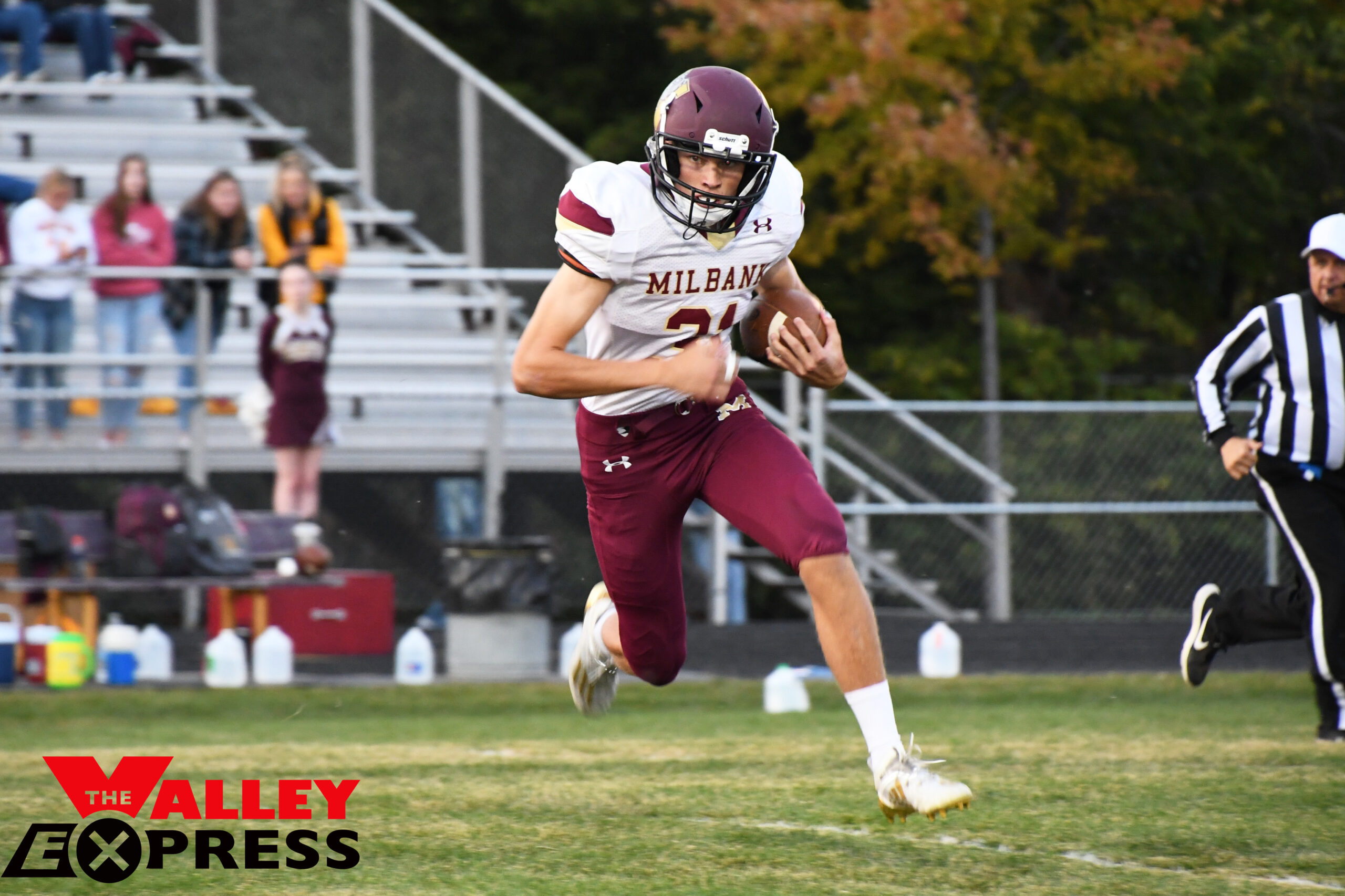 The Bulldogs dominated the field during their football game with the Webster Bearcats on Friday, September 25, on the road. Milbank took the win at 46-14 and improved their season record to 4-2.

The Bulldogs’ head coach, Brian Allmendinger, said, “We had a balanced offense with runs and passes. But, the penalties and turnovers have to be fixed going into the next three games.”

Webster received the ball to start, but the Bulldogs were on fire. On the first
play, Karson Weber picked off a pass at midfield and the Bulldogs’ offense didn’t waste any time. A run by Bennett Schwenn set up a seven-yard touchdown run by Marshall Voeltz. Parker Schell’s extra point kick was good to give Milbank an early 7-0 lead. After holding Webster to a fast three-and-out, Milbank marched down the field again. With help from Voeltz and a completed pass to Sawyer Gauer, the Dawgs set up an eight-yard touchdown pass from Kaden Krause to Mason Riley. The two-point conversion attempt failed, but Milbank remained ahead 13-0 midway through the first quarter.

Webster capitalized on a Bulldog fumble for a 34-yard touchdown run to wrap up the scoring in the first quarter at 13-7. The Dawgs kept working. Completed passes from Krause to Schwenn and Gauer and two significant penalties on the Bearcats helped set up a 10-yard touchdown run by Voeltz for the score.

Krause found Carter Bowsher in the end zone for the two point conversion. Milbank held a  21-7 lead. On the next series by the Milbank offense, Voeltz again found pay dirt  with a three-yard touchdown run. The extra point attempt failed, but the score sat at 27-7 in Milbank’s favor. Penalty flags then started to fly. Weber came up with an interception and a huge return, but a flag nullified the yardage to push Milbank backwards. Shortly after
that, Voeltz broke through several defenders to hustle into the end zone, but a penalty moved the ball back nearly to midfield. Milbank fumbled the ball and Webster recovered, but could not produce points. Several more flags were dropped before the clock signaled halftime.

The Dawgs continued their domination in the third quarter and scored three more times. Krause found the end zone on a two-yard quarterback keeper. Gauer returned a Webster punt to the house from 73-yards out for a touchdown. Webster also scored on a 51-yard touchdown pass, but Milbank answered with a 38-yard touchdown  pass from Krause to Bowser. Schwenn’s PAT was good giving Milbank the victory with a final score of 46-14.

For the defense, Isaac Schulte led the Dawgs with seven tackles. Weber and Gauer followed with five tackles each. Kellen Hoeke and Jared Johnson chipped in with three tackles apiece and Aiden Foell, Schwenn, Bergman, and Eli Johnson were credited with two each. Rounding out the numbers were B. Schneck, Bowsher, Jace Rufer, Toby Schneck, Maddox Hanson, Matt
Christensen, Voeltz, and Breyden Christensen with one tackle each. Weber had three interceptions for Milbank.