featured3380
Each year, across our country, January 9 is recognized as National Law Enforcement Appreciation Day.  The day was first observed in 2015 to show... 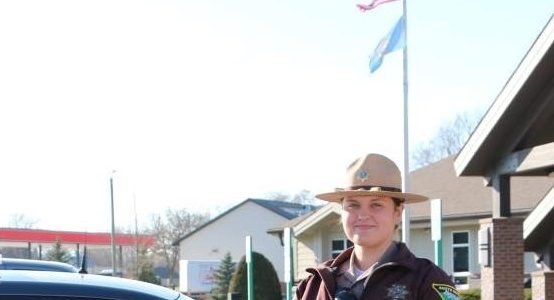 Each year, across our country, January 9 is recognized as National Law Enforcement Appreciation Day.  The day was first observed in 2015 to show support for the men and women who put their lives on the line every day to protect others and those who were killed in the line of duty.

Take your next opportunity to thank a law enforcement officer or keep them in your prayers. And if you have ever wondered why someone chooses law enforcement as an occupation, The Valley Express sat down with one of the newest South Dakota State Troopers —Paige Zempel — to find an answer.

In 2015, when Paige Frazee Zempel graduated from Milbank High School, there were only six female state troopers in the South Dakota Highway Patrol.  Zempel, a talented artist, might have chosen art as a career, but she already had other plans. “For a long time, I’d had my heart set on being a Milbank police officer,” she says.

Her epiphany came about by accident. A real accident. One with the sound of crunching metal and breaking glass. She explains, “My dad, Jacque Frazee, works at Al’s Body Shop, and we got this Camaro to restore. It was our project together. I drove it when I was in high school, but one day I got in an accident. I totaled the Camaro.  That car was so special and pretty sentimental to me.”

But, something good came out of the wreckage. She says, “Corey Hooth from the Milbank Police Department happened to be the officer on duty that day and the one who showed up at the scene. Somehow he managed to calm me down. It changed everything. And it really stuck with me how he treated me.  I knew I wanted to be like him and show up for people on their bad days.”

She decided to check out her dream firsthand and started shadowing some of the officers on the Milbank police force.  She says, “I wanted to work for the Milbank department because Corey was part of the reason I wanted to become an officer. And since this is also where I grew up, it was the perfect place.”

After graduation, she obtained her law enforcement certification at Lake Area Technical College and worked for the Milbank Police Department for two years.  She says,” I found I liked traffic the most and that focus is what led me to the highway patrol.”

To join the nearly 200 troopers in the South Dakota Highway Patrol, she had to be accepted into the academy and attend and pass the 10-week course held in Pierre. Her training was reduced to a six-week class designed for cadets who were already certified in law enforcement. She and her classmates were the first group of South Dakota troopers to adopt the abbreviated training — the pioneers of the fast track class.

On an uncharacteristically balmy day last November, those nine cadets — Zempel, two other female troopers, and six male troopers graduated in an outdoor ceremony. The event had been scheduled for October, but winter weather delayed it and COVID-19 restricted attendance to only immediate family.

Looking back on her experience in Pierre, she says, “At the academy, I really got pushed. It’s stressful; it’s hard. A lot of really long days. It is everything — in the classroom and out on the road, too. After the academy, we had to do field training.  I was sent to the Glacial Lakes squad, then Watertown, then Belle Fourche, then back to Sisseton for 10 weeks of  FTO or on the job training.”

She was then ready for her own territory and joined the Glacial Lakes squad, which is part of District One that also includes Aberdeen, Huron, Pierre and Watertown. Glacial Lakes uses the approximate borders of Marshall, Day, Grant, and Roberts counties and includes any highway or street — graveled  or paved.

Zempel says, “It is up to the trooper to choose the patrol route for that day, and I just never know what my day will bring when I get up and head out.”  She considers it to be one of the best things about her job, but admits it has brought a few grey hairs to family members.

But even in the role of a state trooper, a job that involves inherent risk, South Dakota is one of the safest places in the world to live and work. The statistics bear this out. Five South Dakota State Troopers have fallen in the line of duty, and the last one was killed in 1985.

Zempel, who is married, says, “My family was concerned about me going into the highway patrol because I cover such a big area — sometimes I’m in the middle of nowhere and I’m alone. They worry about me, but they still support me because they know this is what I want to do.”
In emphasis, she unzips her heavy, wool jacket to reveal her badge. Then she laughs and says, “But the hat is how everyone recognizes a trooper.  Anytime a trooper gets out of the car they have to have their hat on. The only reason for not wearing it is if it’s super windy and it might blow away.” Indeed, the hats —ranger style like those popularized by the bear who prevents forest fires — have become so closely associated with troopers, they long ago gained the nickname Smokeys. The hat doesn’t change and the rest of the uniform also doesn’t change with the seasons, Zempel says. “In the summer, the outfit gets really, really hot, but in the winter, it’s great because of the cold.”  She also demonstrates a vital part of her uniform by thumping with her fist. The thud indicates the hard protection of her bullet-proof vest. ”The vest is very uncomfortable, but I got used to it, and now it actually feels weird when I’m not wearing it.”

She also carries a flashlight, baton, hand cuffs, taser, radio, her gun, and magazines for her gun. She weighed herself with and without the equipment and says it all adds between 25 and 30 pounds.

Each trooper is also assigned a vehicle, a practice which began in 1935, when Tom Berry, the governor of Sourh Dakota at that time, procured a vehicle for each of the 10 men in the first South Dakota Courtesy Patrol. The courtesy patrol was the precursor to the motor patrol and eventually became the South Dakota Highway Patrol in 1956.

Today, Zempel’s vehicle is a sleek and fast Dodge Charger. Although, she still has a predilection for Camaros, she says, “I really, really like my car.”  Back in 1935, the 10 patrolmen affectionately called their cars “milk wagons” and their equipment consisted of a first aid kit, a tow chain, and a gallon of gasoline. They had no radios, but called in using a phone at a gas station to check for emergencies.

And there are always emergencies. Now that Ol’ Man Winter has descended on our area, Zempel reminds drivers to exercise even more caution. Often, the best plans is not to travel, but she advises everyone who goes out on the roads to carry extra drinks, food, warm clothes, blankets, and hand warmers. “And,” she warns, “always carry a shovel.”

“If you should ever get caught in a blizzard, never get out of your car! The snow creates an all-white ground that gets you confused. Stay in your car and call someone.” There’s a good chance the person who arrives to help you will be a state trooper. If don’t want to meet a trooper anytime soon, remember to drive safely.  Check weather conditions, slow down, and stay alert. And if you pass one on the highway, don’t be afraid to wave because it might be Trooper Zempel.