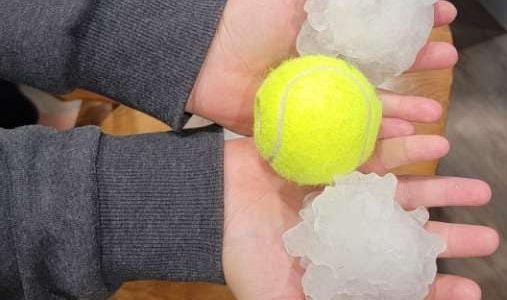 According to Schuelke, Grant County also received varying amounts of rainfall — from 1.4 to four inches. He says, hail, however, did the most damage.  It pummeled a 200-mile area from Lake Oahe to west central Minnesota. The largest hailstones in Grant County were found just north of Milbank and fell in an area as wide as four miles.

Recent fire calls in Milbank included: August 25 at 6:15 a.m. — Firefighters responded to a report of smoke at a house at 504 S Fifth Street. They arrived on the scene to find smoke coming from a cooking stove.

August 28 at 1:16 a.m. — Firefighters were dispatched to 204 Eastman Street for a possible washing machine fire. Tennants of the apartment building were evacuated and the fire was extinguished in a mechanical room.  While firefighters were on the scene, smoke was discovered coming from another apartment building at 206 Eastman Street. Firefighters arrived to find smoke in the stairwell. Tennants were evacuated until the fire was located and put out in the laundry /mechanical room.  Firefighters remained at the scene for about an hour and law enforcement officers stayed at the building until fire investigators arrived.

August 28 at 1:25 p.m. — Milbank Fire and Rescue members were dispatched to assist with extricating a victim from a multi-vehicle traffic accident at the intersection of 475th and 139th.