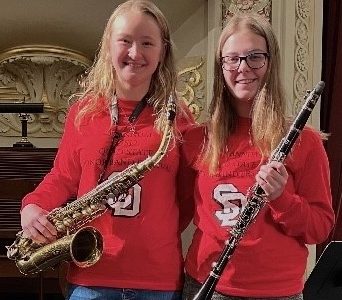 Seniors Hattie Muellenbach and Savannah Stengel were selected for the 23rd Annual Quad State Honor Band Festival. The festival was held February 4-5 at the University of South Dakota in Vermillion.

Muellenbach, who plays the alto saxophone, and Stengal, who plays the clarinet, were both chosen by audition from the top high school musicians in the quad state region.  The finale concert was held February 5 at the Aalfs Auditorium on the USD Campus.

The conductor for the Honor Symphonic Band was Dr. Todd Cranson of USD. Carol Brittin Chambers from Texas Lutheran University was the guest composer-conductor. Chambers was most recently named the winner of the 2019 Women Band Directors International Composition Competition.