featured3438
Hudson Christensen, son of Alysha (Wenck) and Dylan Christensen of Elkton and grandson of Lori Schuler of Wilmot, came into the world on March 1... 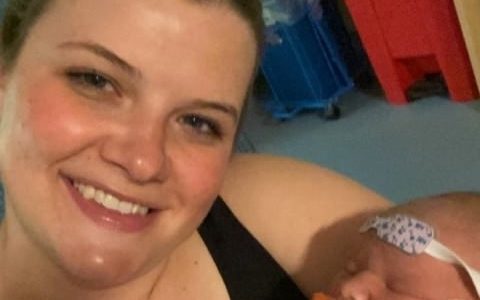 Hudson Christensen, son of Alysha (Wenck) and Dylan Christensen of Elkton and grandson of Lori Schuler of Wilmot, came into the world on March 1 at 10:55 p.m. Hudson was born in Aurora, Colorado, because it is home to one of only three hospitals in the nation, Colorado Children’s Hospital, that could perform the surgery he needed immediately after his birth.

Alysha says, “In the first couple hours of his life, Hudson had a balloon atrial septosotomy echo guidance transeptal puncture with atrial septoplasty/septal stent done.” A lot of big words for a tiny baby and that was only the beginning. This was a stopgap to allow Hudson to stabilize enough to have major surgery on March 7 to correct his condition of transposition of the great arteries or TGA.

Alysha explained, “Usually, when you look at a heart, the arteries cross like you are crossing your fingers. Hudson’s are in a V-shape.”  According to medical professionals, TGA is a rare congenital heart defect that occurs when a baby’s heart develops incorrectly in the womb. This condition is marked by the reversal of the heart’s two most important blood vessels, the aorta and the pulmonary artery.

During TGA surgery, the pulmonary artery and aorta are switched back to their normal positions and the coronary arteries and large blood vessels are switched, too. Any holes in the heart are also repaired. It’s an amazing feat when you consider that a newborn’s heart is the size of a walnut in its shell.

Hudson’s TGA surgery took place on Monday, March 7. Alysha, who has been in Aurora with her husband since February 14, says, “Surgery went great! He is exceeding all doctor’s expectations. We struggled with a tiny bit of weight loss, but got him on some fortifier to supplement my breast milk and fatten him up again. That’s working great.  He still requires low-grade oxygen, but they say we could be coming home soon!”
Read the related story on Hudson and his parents here on The Valley Express.