featured3447
Laverne Alious Nigg, a US Navy Seaman 2nd Class, arrived in Fargo today. His family was at Hector International Airport to greet him, but... 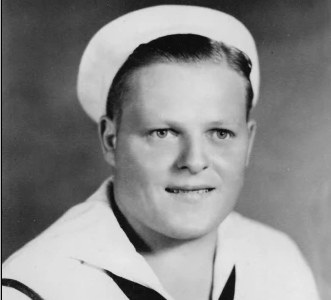 Laverne Alious Nigg, a US Navy Seaman 2nd Class, arrived in Fargo today. His family was at Hector International Airport to greet him, but the family members who likely had loved him the most dearly and suffered the most grievously from his passing were not able to witness this extraordinary moment. The young sailor’s journey home had taken over 80 years.

Laverne, or Budd, as he was usually called, was only 23 years old and a crewmember on the USS Oklahoma that was docked in Battleship Row early in the morning on December 7, 1941, when the Japanese Empire attacked Pearl Harbor in the US Territory of Hawaii.

According to the Oklahoma Historical Society, “The Japanese used dive-bombers, fighter-bombers, and torpedo planes to sink nine ships, including five battleships, and severely damage twenty-one ships. The crew of the USS Oklahoma did everything they could to fight back. In the first ten minutes of the battle, eight torpedoes hit the Oklahoma and it began to sink. A ninth torpedo hit the battleship as it sank in the mud.There were 2,402 US deaths from the attack. Of those deaths, 1,177 were from the USS Arizona, and 429 were from the USS Oklahoma. Budd Nigg was one of the 429.

Budd’s parents, Tony and Lillian, received the dreaded telegram on December 21, 1941 stating Budd was among the missing. They received a similar telegram on February 18, 1942, that declared him deceased, but unrecovered.

According to Pearl Harbor National Memorial reports, “From December 1941 to June 1944, Navy personnel worked to recover the remains of the deceased crew. The remains were then interred in the Halawa and Nu’uanu Cemeteries.”

In September 1947, tasked with recovering and identifying fallen U.S. personnel in the Pacific Theater, members of the American Graves Registration Service (AGRS) disinterred the remains of U.S. casualties from the two cemeteries and transferred them to the Central Identification Laboratory at Schofield Barracks.

The Defense POW/MIA Accounting Agency (DPAA) reported their laboratory staff was only able to confirm the identifications of 35 men from the USS Oklahoma at that time. The AGRS subsequently buried the unidentified remains in 46 plots at the National Memorial Cemetery of the Pacific (NMCP), known as the Punchbowl, in Honolulu. In October 1949, a military board classified those who could not be identified as non-recoverable.

Between June and November of 2015, DPAA personnel exhumed the USS Oklahoma Unknowns from the Punchbowl for analysis. They now had the advantage of using  mtDNa, auDNA, and Y chromosome DNA.  On October 18, 2021, the DPAA publicly announced they had identified an additional 33 Sailors from the USS Oklahoma. Budd Nigg was finally coming home.

In May of 1942, the Nigg family had held a memorial service for Budd in Browns Valley, but on Saturday, June 4, 2022,  Navy Seaman 2nd Class Laverne (Budd)  Alious Nigg, a South Dakota native, will finally be given the homecoming he so richly deserves and laid to rest with other members of his family in Browns Valley, Minnesota. The funeral service and cemetery military honors are open to the public to honor this fallen sailor and hero.

The procession will travel from Eggers Funeral Home in Rosholt at 9 a.m. via the Lake Road and will arrive at St. Anthony Catholic Church in Browns Valley at 9:30 a.m.

Budd learned how to work on the farm at a young age along with his older siblings. He was baptized and received his first communion at the old St. Anthony Catholic Church in Browns Valley. Budd attended school through eighth grade at Easter Township School #4. In his teens, Budd spent time with family and friends attending dances and activities in the community of Peever, close to the farm home.

Like many young people in the 1930s, Budd left his parents’ home as a teenager and found work with the WPA, and also worked as a laborer for a farmer in Folsom Township, MN, near Browns Valley. He registered to enlist in the U.S. Navy through the Easter Township Registrar on October 16, 1940, and began recruit training January 16, 1941, at Great Lakes Naval Training Station in Illinois.

On graduation from recruit training, Budd was assigned in April 1941 to the USS Oklahoma (BB37) battleship, where he served along with three of his first cousins, Robert, Herbert and Edward Nigg. On December 7, 1941, the Oklahoma was moored at Ford Island, Pearl Harbor, when the ship was attacked by Japanese aircraft. The USS Oklahoma sustained multiple torpedo hits which caused it to quickly capsize, killing 429 men. His remains were identified through DNA forensics and on April 22, 2021, Laverne Alious Nigg was accounted for by the Defense POW/MIA Accounting Agency.

At the time of his death, Laverne was survived by his infant son, James LuVerne Skogen; his parents; grandmothers: Elizabeth (Heald) Johnson and Nothburga (Hasler) Nigg; siblings: Raymond, Merville, Berneice (Girley), Kenneth, Agnes (Sis), Leo, Delores, Glenn, Donavon, and Gerald. He was preceded in death by a brother, Bernard, and grandfathers: Henry Johnson and Joseph Nigg.