featured3438 sports-featured1514
Brian Allmendinger, coach of the Milbank Bulldogs football team, says, “We’re excited to get another year going. Last year was a tremendous experience for... 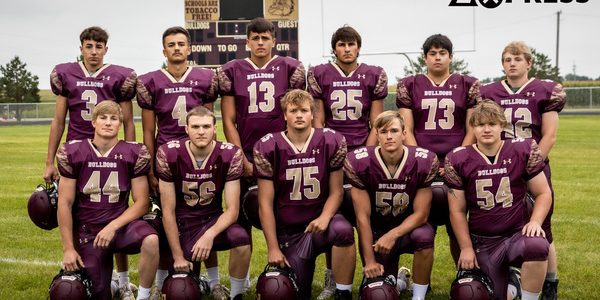 Brian Allmendinger, coach of the Milbank Bulldogs football team, says, “We’re excited to get another year going. Last year was a tremendous experience for us, so we would like to build on that.”

Allmendinger is referring to Milbank’s run to the top in 2021, when the Bulldogs, on a seven-game winning streak, made it all the way to the state championship game in the Dakota Dome to face the top-rated and top-seeded Madison Bulldogs.

Allmendinger says, “This year, we are rebuilding after losing 19 seniors from last year.”He says he will look to the experience of seniors Eli Johnson, Tice Mursu, Aidan Foell, and Sawyer Gauer for leadership. In all, the roster lists 11 seniors and many new starters vying to see some playing time.

Allmendinger, who is entering his fourth year with the Bulldogs and his third year as head coach, says he plans to spend a lot of time working on the fundamentals. “We have a lot of new players who need experience,” he says.  Allmendinger sees Madison as one of Milbank’s biggest competitors again this year and also puts Dell Rapids and West Central on that list.
Nevertheless, he has big hopes for an outstanding season. He says, “Our goals for this season are to have fun, get better every week, and fight for a playoff spot.”

What can the 12th man do to help? Allmendinger says continued support from the home team fans is an important aspect of the game. “Last year, the stands were full. Fans were loud and supportive.” ‘Let’s Go Bulldogs!’ means everybody!

The Bulldogs will hit the road for their first game of the season on Friday, August 26, in Beresford.