featured3438
Milbank’s wrestling season starts with the Battle of the Bulldogs this Thursday, December 1 at 6:30 p.m. at the Milbank Armory.  It’s a new... 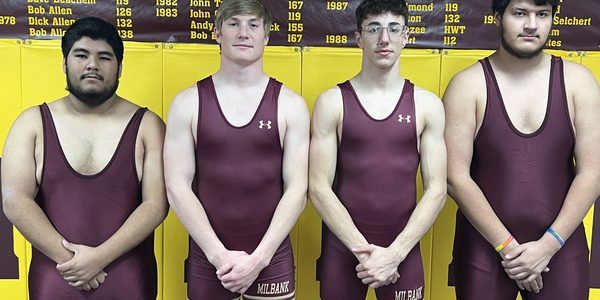 Milbank’s wrestling season starts with the Battle of the Bulldogs this Thursday, December 1 at 6:30 p.m. at the Milbank Armory.  It’s a new season with a new head coach, a new assistant coach, and new ways of dealing with weight classes.

Josh Schmeichel, the new head coach for MHS, is no stranger to the team. This will be Schmeichel’s 10th year as a wrestling coach in the Milbank School District. He has been a middle school coach and an assistant high school coach for the past nine years under former head coach Jeremy Tostenson. He’s also a member of the Bulldog alumni family and earned the title of state champion when he was a senior at MHS in 2006.

Schmeichel brings with him a new assistant coach, Wyatt Winter. Winter is a graduate of Brandon Valley High School. He placed at the state level in wrestling. “Coach Winter has been and will bring great new ideas and techniques for the boys to learn,” Schmeichel commented. Jesse Krause and Toby Schneck will also serve as volunteer assistant coaches

Schmeichel says Milbank’s 2022-2023 roster includes a blend of experience and newcomers. “We have some good senior leadership that I am relying on, but also a lot of underclassman who are stepping up to fill some of the varsity roles. We have six seniors — five who have been with us the past few years and one that decided to give it another try after wrestling for me in middle school.”

The biggest change this year for everyone involved in South Dakota high school wrestling centers around weight — specifically, how wrestlers get certified at their weight class. “Instead of a doctor signing off on the weight at which an athlete can wrestle, the wrestlers now go through a process that measures their body fat and gives them the lowest weight at which they can wrestle safely,” Schmeichel explains. The process also devises a weight-loss plan for the wrestler.

According to Schmeichel, the plan limits the number of pounds the athlete can drop in a week. “A wrestler can only lose 1.5 percent of his weight each week on the way down to the next goal. This means our wrestlers, and wrestlers throughout the state, might not reach their desired weight until later in the season.” The new regimen stands in sharp contrast to the way things traditionally have been handled, but Schmeichel says, “This should be a much safer and less miserable experience.”

He says no team stands out as Milbank’s toughest competitor this season. However, he added, “If I had to narrow it down to a few, it would be the NEC schools we dual in January and February — Redfield, Sisseton, and Webster.”

“My goals for this year are to be as injury free as possible and to get as many wrestlers to state as possible,” he continued. “We have struggled in the bottom position for the last few years, so that will be another area we will focus on.”
Last, but certainly not least he pointed out the importance of fans in the stands. “I’m hoping they get excited and cheer during all our matches.”

Don’t miss the 2022 Battle of the Bulldogs on Thursday, December 1! It’s your first chance to show your support and team spirit and your last chance to see the wrestlers at home until January 7, 2023.

This article was updated on December 1; Wyatt Winter is a graduate of Brandon Valley High School not Mitchell High School